Andrew Reeves is writing a book on Asian carp in North America.

'No one should panic, I'm not panicking," said Becky Cudmore, Canada's leading Asian carp researcher with the Department of Fisheries and Oceans. This was her response to recent news that two male grass carp (a notorious invasive species) were found by Toronto and Region Conservation Authority workers at Tommy Thompson Park.

Finding live grass carp – part of the Asian carp family – along Toronto's waterfront is worrisome. Each fish weighed 18 kilograms, was a metre long, and both were fertile. Researchers worry the fish could damage the $7-billion dollar Great Lakes fishery. They can only speculate on how they arrived at the lakeshore. More importantly, there's no indication spawning populations exist in Lake Ontario. Yet in an instant, the seemingly remote possibility of Asian carp's arrival became real.

Canada's Asian carp monitoring program began in 2013. Each summer, teams of DFO researchers and university interns traverse the province, setting nets, braving the elements and angry snapping turtles to determine if Asian carp swim in Great Lakes tributaries. With the notable 2013 exception of a sterile grass carp caught in the Grand River near Lake Erie, the explorations are successful in that no traces of the invasive fish have been found.

The sense of dread that followed the Toronto discovery undercuts a swift and well-executed response. Regional, provincial and federal agencies aren't typically effective at sharing responsibilities. Yet, soon after TRCA caught and identified the fish, staff and vessels from DFO (who took the lead) and Ontario's Ministry of Natural Resources and Forestry were on site. Dropping gill nets and revving boat engines to rustle up other grass carp, the resulting 550-hour search, the largest such effort in Canadian history, came up empty, as they had hoped.

The Conservative government's endeavours in tackling Asian carp are a rare bright spot in its otherwise dismal environmental record. Conservative Leader Stephen Harper allotted a paltry $415,000 in October, 2010, to carp control before announcing $17.5-million for early detection of Asian carp in May, 2012.

It was a key moment for Canada, signalling our intention to get serious about working with the United States. (who've spent more than $300-million on the issue since 2009) to halt Asian carp. Roughly $400,000 was earmarked for a sophisticated Asian carp facility at the Canada Centre for Inland Waters in Burlington, Ont., the home lab for first responders to the Toronto find.

The downside to Mr. Harper's funding is that it's spread over five years; money will run out within 18 months of the new federal government's mandate following the October election. More grass carp will be found in the Great Lakes in the future. The research and response initiatives undertaken with federal funding allow biologists such as Ms. Cudmore to better understand what is happening beneath the Great Lakes' dark waters.

The collaborative relationship we enjoy with the United States in managing Asian carp will grow fuller with time, as it should. Bi-national sea lamprey control, which has cost Canada and the United States hundreds of millions of dollars since the 1950s, highlighted the value of joining forces on shared ecological (and economic) issues.

Asian carp are no different. Co-operative actions to date have been appropriate: Resource agencies have shared advice, laws have changed, borders have closed. But minimizing Asian carp's adverse impacts will require greater collaboration than previously seen in North America on environmental matters. Wallets will be wrenched open even further. And the U.S. will soon insist Canada justly pay more than we currently do to keep the Great Lakes free of Asian carp.

Mr. Harper's $17.5-million was a good start, yet this money must be increased and funding made permanent if Canada is to pull its weight. Whichever party forms the next government, it's incumbent upon them to uphold the seriousness with which the Conservatives approached managing Asian carp. The future health of the Great Lakes depends on it. 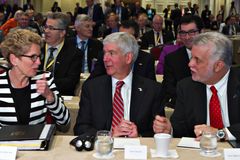 Great Lakes conference stresses regional action on environmental protections
June 13, 2015
Follow us on Twitter @globedebate Opens in a new window
Report an error
Due to technical reasons, we have temporarily removed commenting from our articles. We hope to have this fixed soon. Thank you for your patience. If you are looking to give feedback on our new site, please send it along to feedback@globeandmail.com. If you want to write a letter to the editor, please forward to letters@globeandmail.com.
Comments