In the streets of Westmount, the leafy suburb of Montreal, we walked to and from Roslyn School twice a day. Morning, noon and afternoon, a posse of elderly men manned two busy intersections to escort us across.

Wearing white belts and shoulder straps, holding up familiar red stop signs, they would march fearlessly into the street and halt the traffic. In the early 1960s, before the language wars erupted in Quebec, the signs were English. So were the crossing guards.

They were veterans of the Great War. They were mostly in their late 60s, which was about when the average Canadian man died then. Grey and creased, they seemed impossibly old to us.

The Great War, then 40 years in the past, was ancient history. It didn't intrude on our young consciousness.

Except on Remembrance Day.

At 11 o'clock on the morning of Nov. 11, without fail, we rose at our desks, bowed our heads and said nothing. We shoved our hands in our pockets, stared at the floor and barely shuffled our feet. No one said a word.

This was not a natural state for children in primary school. The silence seemed an eternity. It lasted two minutes. Always.

We did this every year in the Protestant School Board of Greater Montreal. It wasn't just in the public schools. As an adolescent, I remember announcements on loudspeakers and moments of silence on Remembrance Day in the library and the supermarket.

Ask those who grew up in postwar Canada about this ritual - which originated in Canada in 1919 with a message from King George V read in Parliament - and some recall it vividly. It seemed to depend on where you lived.

For us, the culture of remembrance was real. It wasn't just the crossing guards. Veterans of the Second World War were everywhere. If they weren't our fathers or relatives, they were our teachers, coaches and scoutmasters.

They were still vital, many in their 40s, and they were part of our lives - which isn't to say they talked about the war. For the most part, they did not. There was no popular ethic of disclosure, or loose-lipped, soul-baring sharing, as there is today. My God, people would suffer from cancer without admitting it, as if their illness were alcoholism or incest.

Still, the wars were part of the public memory, even if they were undeclared. Given the proximity in time, society seemed to talk less and reflect more. Politicians such as Lester Pearson who could have been war profiteers were remarkably self-deprecating about their service.

But, oh, how Remembrance Day mattered! Beyond those two minutes of silence, we would recite In Flanders Fields . Veterans in uniform would visit the school. The day was important.

Over the past generation, as veterans of the wars aged and died, we forgot how to remember. Today, the ritual of a collective moment of silence has faded.

Now, though, amid an encouraging renewal of interest among Canadians in Remembrance Day, it is time to revisit this ritual.

On Nov. 11, the Historica-Dominion Institute is asking Canadians - wherever they are, whatever their language - to stand up and be silent. The purpose is to reflect on those who died in the service of Canada in any capacity, in any theatre, and to honour their sacrifice.

Our hope is for two minutes of silence everywhere - in the schools, in the shops, in the courts, in the streets, at airports and train stations.

In Toronto, radio station CIUT, at 89.5 FM, will go silent for two minutes at 11 a.m. We hope other broadcasters will do the same, giving new meaning to radio silence.

The beauty of silence is that it has no language. It is a time to reflect. Yet, it is the loudest statement we can make, as a country, of the people we are, and the people who were.

Andrew Cohen is an author and president of the Historica-Dominion Institute.

Opinion
The political lessons of Lester Pearson
March 7, 2009
Opinion
The making of the president
January 2, 2008
Opinion
And the last Kennedy shall be first
August 26, 2009 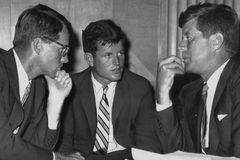