Shawn Atleo, the new head of the Assembly of First Nations, made improvement in Indian education one of his campaign priorities.

Mr. Atleo earned a master's degree in education. He's a hereditary chief of the Ahousaht Indians, who live off Vancouver Island, on Flores Island, a place that that can only be reached by plane or sea. So Mr. Atleo must know something about the challenges of Indian education in general, and specifically those of getting an education on isolated reserves.

Mr. Atleo will need both sets of experiences, and more, to find ways to close the gaps between Indian and non-Indian education achievement - and between the weak educational performance of Indians on reserve and the somewhat better showing of those off reserve. (We're talking about Indian performance here, not overall aboriginal performance, since the situation for Inuit and Métis is different.)

Almost half of Canada's Indians - 40 per cent off reserve, 60 per cent on reserve - have less than a high-school education, according to the 2006 census. A little overall progress has been made in recent years, entirely by Indians off reserve. The share of individuals completing high school on reserve has fallen.

There's nothing at all surprising in the gap between off- and on-reserve performance. By any measure - unemployment, earned income, poverty, indicators of social dysfunction, education - Indians on reserves are worse off than those who live off.

In education, the situation is confusing because about two in five on-reserve students attend off-reserve schools. If educational achievement alone dictated where they should go, off reserve is the answer.

That observation is buttressed by the research of Simon Fraser professor John Richards, who has been tracking Indian educational achievement, alone and with other researchers. He has found that a) off-reserve Indian youngsters have better educational outcomes, b) the higher the concentration of Indian youths in a school, the poorer the educational outcome. Try to get more Indian students into mainstream schools, if academic achievement (as opposed, say, to learning an aboriginal language) is the desired result.

These sorts of findings irritate some Indian chiefs and teachers. The whole thrust of Indian leadership has been to reassert "nationhood," which often isn't easy to do with so few people living on the reserves that are supposed to be the heart of a nation's territory.

Leaving "nationhood" arguments aside, dollars follow numbers. If an aboriginal student attends school off reserve (in much of Canada), he or she is in a system financed by the province. If the student attends on reserve, the money for the school comes from Ottawa. The AFN asserts that the federal money, per capita, is a lot less than the provincial. Estimates of the per-student gap range from $1,000 to $5,000.

Eliminate that gap, insists the AFN, and educational performance in on-reserve schools will improve. Indeed, it might, but money remains only one factor influencing educational achievement.

Peer influence from other students. The cultural importance attached to formal education leading to work in the modern economy. (See Chinese and East Indian immigrant families.) Family formation and parental engagement in education. Geographic location. Teacher effectiveness, materials, facilities. These are among the factors that are at least as important as per capita grants in determining participation and outcomes by Indian children.

Then, there's the more fundamental problem with on-reserve education: the geographic, cultural or social isolation of so many reserves. A couple of thousand extra dollars per student won't do much about the challenges that accompany geographic isolation. Around many of the reserves, there are few job opportunities. Of those that do exist, not many require higher education. Where are the community, parental or regional incentives to achieve academically?

Mr. Atleo found those incentives, got his master's degree online and is chancellor of Vancouver Island University. Perhaps his life experience can be instructive in helping Indians, and non-Indians, to figure out how to lift on-reserve educational outcomes.

Poor outcomes lead to lost opportunities - and a greater cost to the treasury for use of government services.

Opinion
Education is the key to aboriginal (and Canadian) potential
February 19, 2010 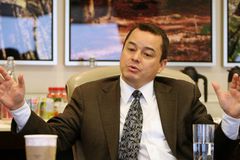