Like so many mass killers before, Elliot Rodger has taken his secrets to the grave. The 22-year-old, who killed six people and then himself in California, left behind a "manifesto" and a series of YouTube videos that spewed hatred toward women. What psychological illness led him to this horrible violence remains a mystery.

At this point, we're not likely to find out. But we, being creatures of nature, abhor a vacuum. Every detail of Mr. Rodger's life has been examined as a possible explanation for his actions. One of the things that has cropped up in almost every story is that he may have been diagnosed with Asperger's syndrome.

"Supposedly, he was on the spectrum, he had Asperger's," Donny Deutsch said on MSNBC after the shootings, "and that was also supposedly a syndrome of the last horrible mass killing, and sometimes there are problems without solutions."

Well, one of the solutions to this problem is to stop making ridiculous correlations between autism and murderous rage. As journalist Tommy Christopher wrote after the killings, "what little reliable science there is shows that autistic people are actually less prone to violent crime."

The "last horrible mass killing" Mr. Deutsch referred to was the massacre of schoolchildren in Newtown, Conn., in late 2012. The killer in that case, Adam Lanza, had been diagnosed with Asperger's, but there was no indication that this diagnosis had any bearing whatsoever on his crime. He most likely suffered from mental illness, and, despite popular shorthand, Asperger's is not a mental illness; it is a neurodevelopmental disorder that affects social communication. Once again, a false equivalency was used to demonize people with autism – a group, it should be said, that is no stranger to demonization.

(This year, Asperger's was removed as a separate diagnosis and now falls under the umbrella of Autism Spectrum Disorder.)

This is an instructive passage from a recent New Yorker story about Peter Lanza, Adam's father:

"Peter gets annoyed when people speculate that Asperger's was the cause of Adam's rampage. 'Asperger's makes people unusual, but it doesn't make people like this,' he said, and expressed the view that the condition 'veiled a contaminant' that was not Asperger's."

The stories about Mr. Rodger have used shorthand to describe the effects of Asperger's – social awkwardness, difficulty understanding others' emotional worlds, love of routine – but this is like describing zebras with one word, "striped." People with the condition are as different from each other as so-called normal folk. They are not the idiotic stereotypes so popular on shows like Glee, where the self-diagnosed girl runs around insulting people and then says blithely, "Sorry, Asperger's!"

The one thing that does unite them is that they're more likely to be the victims of bullying and crime than they are to be the perpetrators. Their inability to accurately gauge social situations can lead them into trouble and make them the victims of cruel jerks, as became evident in two recent situations.

In London last year, a man with Asperger's named Andrew Young was killed when he confronted a cyclist pedalling on the sidewalk. (Aspies, as they're known, usually have a strong sense of right and wrong, and don't like rules being broken. They may not understand that discretion is the better part of valour.) The cyclist's friend punched him to the ground, and Mr. Young died when he fell and hit his head.

There's a devastating case in Maryland at the moment involving an autistic teen and two girls he thought were his friends. These so-called friends tried to run him down with a car, held a knife to his throat and coaxed him into an icy lake – all so they could film it and share it for a good old laugh. One of the girls was sentenced to time in a juvenile facility; the other is currently awaiting sentencing in a juvenile court. The boy's lucky to be alive. Apparently, he doesn't understand why his friends would have treated him that way.

As Clare Sainsbury writes in Martian in the Playground, her book about living with autism, "children with Asperger's make 'perfect victims,' a fact that most bullies are quick to discover: We have no tactics for verbal or physical self-defence, we are extraordinarily naive, we almost never tell and we can be reduced to tears of frustration and rage with delicious ease."

Every day, there are kids with autism who feel like "martians in the playground," suffering at the hands of others. That, and willful misunderstanding of their plight, is the real crime.

In the aftermath of the California killings, one issue no one talks about
May 30, 2014 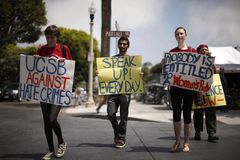 May 31: This week’s Talking Point – what violence says about gender fault lines – and letters to the editor
May 31, 2014