Omer Aziz is a writer and J.D. candidate at Yale Law School, where he is a Fellow at the Information Society Project. He tweets @omeraziz12.

It has become increasingly clear that Stephen Harper will fight the 2015 election campaign by touting anti-niqabism while dropping hints that his opponents are therefore terrorist sympathizers. As far as political strategy goes, the approach is cost-free: An overwhelming majority of people are against the niqab and people are easy to frighten. The Liberals and NDP should be commended for opposing this style of politics, and standing up for liberal principles of choice. The state, after all, has no business in the dressing rooms of the nation.

But while a woman's right to dress how she wishes should be respected by fellow citizens, recognized by courts, and accommodated where possible – and citizenship ceremonies easily meet the reasonable-accommodation standard – the defence of this right should not be made without necessary caveats, the most important of which is the niqab's anti-liberal, anti-democratic nature. Defending an illiberal practice in a liberal democracy must be a two-step process where the individual's decision is protected, but the attitudes underlying the practice are vigorously critiqued. It is the second step that is missing from the debate today.

To begin with the obvious, the niqab has almost nothing to do with Islam. It is a face covering that dates back to the cultural mores of seventh century Arabia, and the majority of Muslim women do not wear it. Al Azhar University in Egypt, the great centre of Sunni learning, banned the niqab in 2009 and its head at the time, the late Muhammad Sayyid Tantawy, denounced it as a folk practice. Even the ruling Justice and Development Party in Turkey, known for its soft Islamism under President Recep Tayyip Erdogan, has not considered lifting the Turkish niqab ban.

The debate in Canada has proceeded as if this vigorous contest over the status of the niqab and its rejection by most women has not happened. This is the default politics of multiculturalism at work, with white Westerners essentializing all Muslims as the same. We hear often about 'the Muslim population' and 'the Muslim world,' as if the million Canadian Muslims and the billion-plus Muslims around the world were without internal pluralism, debate and diversity. Call this neo-Orientalism, where outsiders define Muslims as all thinking and acting the same way, which is simply to say not thinking or acting very much.

It is true that some women freely decide to wear the niqab because they see it as a form of modesty; their personal wishes, again, must be respected. But to reduce this debate to individual choice misses the point in several ways. Some women are forced to wear the niqab by family patriarchs, and because one's outlook on dress and public perceptions is formed at an early age, the veiled teenager can quickly become a niqab-wearing adult.

"What autonomy of choice do you have if your preferences are so obviously conditioned by your social milieu?" asks Zia Haider Rahman in his novel In Light of What We Know. That there may exist even a small minority of women who have been forced to wear the niqab should be enough to cast suspicion on the free-choice argument.

Assuming it is genuine modesty and not an ostentatious display of conservative religiosity that motivates a woman to wear a black veil sequestering her from the rest of society, a cultural practice that demands of one sex to cover up is inherently misogynistic. If anyone should be required to cover their faces, it is the men who torture and kill their daughters and sisters for marrying of their own free will. Let us not mince words here: Women are certainly 'free' to wear the niqab, in the same sense as they are 'free' to enter the mosque from the side and 'free' to stand behind the men while praying. This is a blinkered idea of freedom, but liberalism requires tolerating and legally protecting illiberal attitudes.

The main problem with the niqab, though, is that it diminishes liberal democracy. What separates liberal societies from dictatorships is that the former are open, allow for face-to-face consultation, encourage dissent, and recognize individuals as equals. Liberal societies must allow one citizen to see another citizen's face when in conversation or contact. When only one party's face is visible, the informalities of open conversation disappear, body language is eliminated, the natural empathy we humans feel when looking at our fellow human's face is extinguished. A veil over the face of one citizen permanently alters the terms of the discussion, which is why niqabs have no place in classrooms and other institutions where free discourse is designed to flourish. Imagine a society where all women covered their faces, as some of the more totalitarian Islamists would impose. Call this society what you like, but it would be the farthest thing from liberal democracy.

Neither, however, is the niqab. 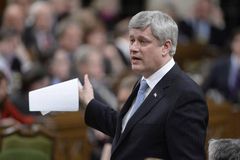