Of all North American sports, baseball is the sleeping giant of activism. Politics has always followed the game like a catcher following a bunted ball along the edge of the chalkline.

Not forgetting its dreadful origin as a white man's club that once forbid men of colour to participate, it was Branch Rickey Jr.'s influence and Jackie Robinson's presence that opened greater society to ideas of integrated sport and life. It empowered ballplayers – most of them Latin or African-American – to be heard as well as seen. Robinson gave way to Dock Ellis who gave way to Dick Allen who gave way to the Puerto Rican slugger Carlos Delgado, who, as a former Blue Jay, resisted standing for "America the Beautiful" because of that country's presence in his island homeland.

This is to say nothing of Jay Z's stirring, post 9/11 Yankee Stadium debut of Empire State of Mind, a musical gesture of defiance on the game's most hallowed field of play.

Activism and protest and the bold address of a nation's frailty has not been entirely reserved for athletes of colour. It was in 1942 across the stadium speakers of America's ballparks that President Franklin D. Roosevelt interrupted afternoon play to speak to hundreds of thousands of fans, imploring them to support the sport despite their nation having recently joined the war, and, in 2016, Barack Obama used "baseball diplomacy" as a way of finding a compatible middle between the United States and Cuba, attending a game between the Tampa Rays and the Cuban national team.

All of this brings us – as many things do these days – to Donald Trump. Traditionally, American presidents – good presidents; bad ones; unathletic ones; ones with ice cream shop mustaches and beards – have thrown out the first pitch of the season, which falls Sunday afternoon in Tampa.

And yet Mr. Trump declined an offer from his local team, the Washington Nationals, to chuck the pill, giving no reason for eschewing his ornamental duty. His diffidence might have been affected by the pronouncement of Baltimore Orioles owner Peter Angelos, who said that he wasn't interested in having the former New York real estate magnate appear at his ballpark, telling a Baltimore-based podcast that the President has said things that are "problematic from a race, ethnicity, religious, gender and disability" point of view. This came only months after the Chicago Cubs hurried their White House visit so that they could, allegedly, avoid having to break bread with the new president, choosing to be feted by his predecessor, Barack Obama.

But baseball and the President will only be able to avoid each other for so long. If Mr. Trump's policy pieces continue to involve changing immigration policy, deporting illegal aliens, re-examining steps made in a new detente with Cuba and building a wall along the Mexican border, baseball's body of athletes will come directly in the GOP leader's line of fire. How they respond will be key to knowing whether they have more in common with the muted, apolitical superstars of the 1990s and 2000s or their emerging basketball brethren, who have led the voices of athlete resistance against white nationalists.

With Cubans, Mexicans, Dominicans, and others among the estimated 11.4 million illegal immigrants, baseball's diaspora reflects America's, and the poetry of a Dominican slugger like Boston's David Ortiz bringing long-awaited salvation to a redcoat state has shown the beauty of America's cultural soup.

But Mr. Ortiz is retired and there's a totemic vacancy at the top. What the next foreign-born superstar does with his crown will say a lot about baseball's destiny as a force for change and resistance. 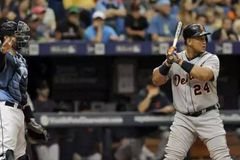