Mark Podlasly complains of aboriginal stereotypes: poverty, crime, poor education, unemployment. All are present to varying extents in aboriginal Canada, but there are lots of Mark Podlaslys, too: well-educated, articulate, professional aboriginals, living off-reserve, who don't accept the vision of most of the country's native political leaders.

After almost a decade working in the United States and Asia, Mr. Podlasly (with his aboriginal wife, who just received her PhD from the Massachusetts Institute of Technology) has come home to British Columbia to make a difference. What he wants to do is implant himself and other aboriginals in B.C.'s business culture, not as token aboriginals but as the professionals they are. "I'd like to see how people view professional aboriginals," says Mr. Podlasly, who has established a consulting firm.

Ideally, he'd like to create a network of such people, with varying skill sets, to work with him. A graduate of Trinity Western University, Mr. Podlasly worked for the federal government, then Westcoast Transmission; he earned a master's degree in public administration from Harvard, worked on developing and managing joint U.S.-Korean ventures and now seeks involvement in large resource-based projects.

He's a member of the N'laka'pamux First Nation, part of the B.C. Interior Salish nation. He grew up there and returned during the summers after his parents moved to Vancouver, where he attended high school in New Westminster. His first nation has 15 bands and two tribal councils; his own reserve has 60 people living there from a membership of 350. And therein lies a drama played out across Canada, where small reserves can't be economically self-reliant no matter what their chiefs say.

The ideology of contemporary aboriginal Canada is about self-government, self-determination and allowing people to remain on their traditional territories. Against this ambition are the facts on the ground - as Mr. Podlasly says, "people are running away." Running away from reserves that are economically defunct or marginal, running toward cities, where they hope to find better education, better jobs.

Half of aboriginal Canadians no longer live on reserves, and for good reason, but when they leave, they lack a political voice. The overwhelming voice of aboriginal Canada, Mr. Podlasly argues, is owned by the chiefs and their councils, whose mantra of self-government is mocked by facts on the ground in too many cases.

"There's a split in aboriginal communities about whether the future should be land-based," he says. Obviously, many people fear assimilation if they leave traditional territories, but Mr. Podlasly says integration, globalization, the "fusion of two worlds," is the way of the future, "proudly aboriginal but part of global networks." He adds: "There is little space for those of us who identify with our cultural heritage but are not interested in perpetuating the political dysfunction that is now occurring across aboriginal Canada."

Some of the B.C. chiefs favour economic development as quickly as possible, and don't want to wait for the laborious, frustrating, treaty-negotiating process. And they don't fear more contact with non-aboriginals as a stepping stone to cultural assimilation. But those chiefs are in the minority.

Mr. Podlasly understands the desire for a land base, because it ties aboriginals to tradition and culture, but "it's too narrow a definition in modern countries." Being part of the mainstream, while retaining aboriginal heritage and links, is the better way forward.

His dilemma, in short, is of being from a place he holds dear that no longer offers hope for him or his children: "My heart is still there; my economic opportunities are here." 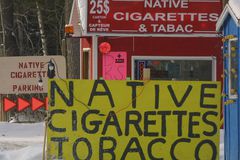