Byron Sheldrick is chairman of the political science department at the University of Guelph. Samir Gandesha is director of the Institute for the Humanities at Simon Fraser University.

At 4:00 on November 17, the RCMP read an injunction that had been granted the previous Friday prohibiting members of the public from traversing areas of a Burnaby Mountain Conservation Area. The initial injunction had initially been directed at members of the Burnaby Mountain Caretakers and Burnaby Residents Against Kinder Morgan Expansion, and two Simon Fraser University professors who are members of those groups. They were also served with a $5.6-million civil suit. These are the roots of the current standoff between the RCMP and the protestors.

The lawsuit brought by Kinder Morgan against demonstrators peacefully protesting survey work on Burnaby Mountain represents a classic strategy of political and legal intimidation. Strategic Lawsuits Against Public Participation -- or SLAPPs -- are lawsuits brought against group of citizens, usually alleging that the group has committed defamation, trespass, or some other civil wrong, which have the effect of curtailing political engagement over a public issue.

These lawsuits generally involve damage claims and requests for injunctive relief, and place a chill on public engagement. The impact of a such lawsuit, when brought by a major corporation and claiming millions of dollars in damages, cannot be overestimated. The prospect of losing one's house would test the political mettle of anyone.

SLAPPs are extremely effective political weapons. They remove political issues from their context, transforming them into narrow issues of civil liability. In the Burnaby Mountain case, issues of environmental integrity, the impact of pipelines on conservation lands and the autonomy of municipal governments are at stake. The National Energy Board ruling granting Kinder Morgan the right to conduct survey work on Burnaby Mountain effectively overruled local municipal decision-making. The Mayor of Burnaby, Derek Corrigan, was re-elected in the recent elections on an anti-Kinder Morgan platform. He and Burnaby Council are currently appealing the ruling, which arguably represents a significant departure from current understandings of both the authority of administrative tribunals and current jurisprudence on federalism.

Yet, it is the authority of this NEB decision that stands at the heart of Kinder Morgan's claim that demonstrators are "trespassing" on what is otherwise considered public land. The legal issues in the case are far from settled, yet the narrow issue of trespass has been employed to support a major damage claim and an injunction that, now that it is being enforced, permits the company to complete its work before the courts have even considered the validity of the original NEB ruling. Moreover, not only is the board's initial ruling under appeal, the NEB's very impartiality has been called into question by the former head of BC Hydro, Marc Eliesen, who resigned from it last week, describing the board as "industry captured."

The case reflects the urgent need for legislation regulating SLAPPs. Courts have proven ineffective at doing so. In Canada, only Quebec has legislation in place. Ironically, British Columbia was the first province to enact anti-SLAPP legislation in 2001, although it was reversed shortly after the election of the Liberal government. Critics of anti-SLAPP regulations argue that such legislation erodes the rule of law. However, in Ontario, a blue-ribbon panel recommended the introduction of anti-SLAPP legislation. Legislation based on the report was introduced, but subsequently died on the order paper when the last Ontario election was called. The Ontario government has committed itself to reintroducing the bill, which is carefully designed to balance rights of citizens to public and political expression, while ensuring that "real" grievances continue to be dealt with by the courts.

Such legislation would help here. There's no better evidence of the frivolous nature of Kinder Morgan's suit than its claims that the protestors made "threatening" faces. This launched a satirical "Kinder Morgan face" trend on social media.

The proposed Ontario legislation requires the court to hold an expedited hearing to determine whether the litigation involves a matter of public interest and negatively impacts political expression. If the answer is "yes," then the burden shifts to the plaintiff to demonstrate that they have suffered actual harm and that the lawsuit would likely be successful. It is important to keep in mind that over 80 per cent of SLAPP cases are unsuccessful. Winning the case is rarely the objective behind these lawsuits. An expedited hearing process ensures that plaintiffs cannot use the courts to tie citizens up in expensive court proceedings as a strategy for curtailing public expression. The Ontario legislation also would put on hold all related proceedings, thereby preventing the very scenario unfolding on Burnaby Mountain.

As a result of the SLAPP suit filed by Kinder Morgan, we now have the RCMP acting at the behest of a foreign oil company to arrest young people, SFU faculty and Coast Salish elders, who are profoundly concerned not just about what more than doubling of the capacity of these pipelines might mean to the region but also about the effects of tar sands bitumen on global climate change more generally. When challenged about what he thought about what this meant for the ability of Canadians and First Nations peoples to democratically determine their own fate, one RCMP officer simply said he doesn't think about such issues; he was simply "doing his job." Where have we heard that before? And with what consequences?

At a time when the lack of citizen engagement, growing political apathy as reflected by low voter turn-out, and general cynicism about our political system are universally lamented, it is important that our institutions of justice not be co-opted into processes that further erode and undermine the quality of our democracy. 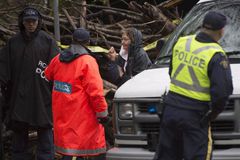 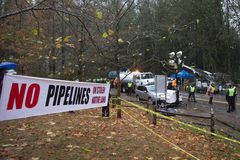 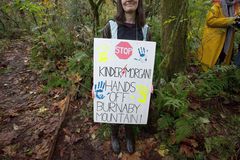