I live in Vancouver, one of the most beautiful cities in the world. Surrounded by mountains and ocean, the city is a paradise of beaches and gardens, parks and yoga studios, a hub of green ideas, progressive politics and entertainment industry glitter. But there's a dark underside.

Vancouver is in a province that has the most astonishingly neglectful child labour laws in North America, indeed in the world. Afghanistan and Haiti have more protective laws on their books. In British Columbia, a child can go to work at 12, in just about any job, hazardous or not (mines, taverns, bars and lounges are the only exceptions), and he or she can be required to work at any time of the day or night except during school hours.

The introduction of this regime by a Liberal government in 2004 – before which the minimum work age was 15 – has substantially increased the number of children working in the province.

Business tends to favour permissive child labour laws (likely the reason B.C. said its new law would help make the province more "economically competitive"). Young people work for less pay than adults. They're easily cajoled to work long and irregular hours without overtime pay, and to accept pay deductions for transportation, uniforms and equipment. They're more willing to take on tasks and less likely to ask questions about safety and training. They usually don't know their workplace rights and tend not to report abuses. And they don't unionize.

None of this makes child labour right. But it does make it attractive for businesses seeking flexible and pliant workers, and for governments bent on serving those businesses' interests.

B.C.'s regime belies any belief that child labour is solely a problem of the developing world. True, child labour is a scourge in poorer countries, where most of the world's 218 million child labourers work in harsh and unhealthy conditions, for little pay, often making the very products that fuel our own society's hyper-consumerism. But most poor countries have joined forces to eradicate this kind of child exploitation.

In the past few years, 156 countries, including Afghanistan and Haiti, have signed an international treaty that bans the employment of children under 15 and requires signatories to raise that minimum age to 16 when conditions permit. Canada and the United States have refused to take part in this effort. As a result, both countries explicitly permit forms of child labour that are banned in much of the world.

The arguments against child labour are really no different today than they were a century ago, when a broad-based "child-saving" movement swept through North America to get kids out of mills, mines and factories. Child labour is "unacceptable," according to the International Labour Organization, "because the children involved are too young and should be in school, or because even though they have attained the minimum age for admission to employment, the work that they do is unsuitable for a person below the age of 18."

But child labour can be eliminated. Better laws are necessary – perhaps along the lines of the ILO Convention, with its 15-year-old and 16-year-old minimum ages for work and its various limitations and allowances – as are more effective enforcement mechanisms and stronger penalties for violations.

At the same time, it bears stating that not all work by children should be banned as child labour. As the ILO has said, "helping parents around the home or earning pocket money outside school hours and during school holidays" should not be considered child labour. More generally, "when children or adolescents participate in stimulating activities, volunteering or work that does not affect their health and personal development, or interfere with their education, this is generally seen as being positive."

B.C.'s permissive child labour law goes well beyond that, however, by placing few protective limits on the kinds and hours of work employers can demand of children as young as 12. Despite that, willful blindness continues to foster the belief that child labour is only a problem "out there," in the developing world, but not here at home.

So is B.C.'s permissive regime at the forefront of a movement toward greater acceptance and facilitation of child labour? Or is it just a shameful exception to a growing international consensus against the practice? My hope, needless to say, is that it turns out to be the latter.

Joel Bakan is the author of Childhood Under Siege: How Big Business Targets Children . 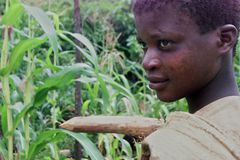