In B.C., there's something almost sacred about salmon. So when the salmon runs started to dwindle, the blame game began in earnest. The disastrous decline in salmon stocks has been blamed on everything from misguided first nations' fishing policy to global warming, pollution and habitat loss - to say nothing of mismanagement by the Department of Fisheries and Oceans. But the biggest villain is fish farms. Many people believe the fish farms are responsible for spreading deadly sea lice and disease to wild fish. Three years ago, activists warned that B.C.'s population of pink salmon would be virtually wiped out if the infestations continued.

Now, to everyone's astonishment, the fish are practically leaping into the boats. It's the biggest sockeye run in a century. The pink salmon are also back in droves. In Atlantic Canada and Quebec, too, salmon returns are setting records. So much for sea lice.

"I think it's sad," says fish researcher Vivian Krause. "We've spent close to $15-million on sea lice research and now the Cohen commission, which was largely forced into existence by sea lice fears."

The commission, headed by B.C. Supreme Court Justice Bruce Cohen, was set up to examine the scientific questions raised by the collapse of the salmon stocks. At last week's hearing in Campbell River, environmentalists and tourism operators showed up to blast the fish farms yet again - even as the Fraser River fishery ran out of ice. "It's kind of ironic that we sit here and talk about the declining Fraser stocks when there's a record run," said Darren Blaney of the Homalco First Nation.

Thanks to Greenpeace, the David Suzuki Foundation and other activists, fish farms are among the most loathed operations in British Columbia. At first, environmentalists said farmed salmon contained dangerous levels of cancer-causing PCBs and shouldn't be consumed by pregnant women - until it turned out that wild salmon (declared safe by Health Canada) has even higher levels of PCBs. Then they warned that escaped salmon would interbreed with wild salmon and produce Frankenfish. The scare that finally stuck was sea lice (even though there's no good evidence that sea lice are a problem). Yuck!

The best-known fish-farm fighter is Alexandra Morton, a media darling who's become a folk hero for her tireless (and effective) crusade. Few people are aware that Ms. Morton and other environmental groups have received tens of millions in funding from huge U.S. charitable trusts, including the Moore and Packard foundations, as well as lesser sums from local commercial fishing companies. Packard also spent millions on campaigns to persuade Wal-Mart and Safeway to carry Alaska wild salmon instead of farmed B.C. salmon. Not coincidentally, Alaska has also been busy demonizing fish farms, because its wild salmon competes with B.C.'s farmed salmon for market share.

"The environmental movement has enhanced its credibility by arguing for positions that serve American interests," observes Ms. Krause (who doesn't get funding from anyone). Ms. Morton now says she's stopped accepting money from the Americans.

Aquaculture, which involves raising fish in close quarters in open-net pens in the ocean, is a relatively new industry. It's had its share of growing pains, and is by no means problem-free. Still, it brings considerable economic benefits to British Columbia, as well as local sustainable jobs to first nations up and down the coast. But many in the industry have put their expansion plans on hold because of the mounting pile of regulations and dreadful PR.

Yet, even if the salmon return again next year, and the year after that, aquaculture is the future. As the world's population soars, global food needs are soaring, too. Our oceans are shockingly fished out (a far more urgent problem than global warming). Like it or not, farmed fish will soon be vital to feed a hungry world. We should be pouring money into improving the industry, not fighting it. Too bad popular hysteria, whipped up by phony fears, is getting in the way.

Opinion
Sign of the fish: another judicial inquiry
November 12, 2009

Opinion
A hate-filled product of poverty or a ball-hockey-playing doctor?
August 31, 2010 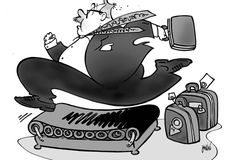 Opinion
Geographically speaking, what on earth is Canada doing?
December 4, 2009