In 1991, when video was released of Rodney King being beaten by Los Angeles police officers, Alton Sterling of Louisiana was 12 years old. Philando Castile of Minnesota was seven.

The King video was supposed to provide irrefutable evidence of what black Los Angeles residents had been describing for decades: systematic, racist police brutality. Now, many assumed, the violence black Americans had long endured from police would not be denied. Now, finally, officers would have to face legal repercussions.

But instead, the officers who abused Mr. King walked free. And today, videos of Mr. Sterling and Mr. Castile being killed by police officers circulate online, joining videos of police officers killing Laquan McDonald of Chicago, Walter Scott of North Carolina, and Eric Garner of New York, among others.

The legacy of the Rodney King video was not justice, but sequels.

Mr. Sterling died at 37. Mr. Castile died days before his 33rd birthday. They left behind children, parents, and friends. They were men who loved and were loved. Today their loved ones, in the midst of grief, are tasked with not only proving these men's innocence, but vouching for their basic humanity. Advocates of Sterling and Castile will fight to put the officers who killed Sterling and Castile on trial, knowing Sterling and Castile were on trial their whole lives in the court of public opinion. Their very existence as black men is considered, in the eyes of many Americans, evidence of their guilt.

Police officials and media will publicize criminal records – as they already have for Mr. Sterling – to try to justify a killing that had nothing to do with his previous low-level offences. They will assassinate Mr. Castile's character, as they consistently assassinate the character of even the youngest African-Americans – children like 12-year-old Tamir Rice, killed by a police officer while playing in a park.

They will do anything to make people turn away from the videos, the proof, the pain.

They know that no documentation will bring justice if the audience is willfully blind – seeing only what they want to see. What many want to see is justification for black death.

Official statements on the killings of Mr. Sterling and Mr. Castile cloak the killings in passive voice and euphemisms. "During the stop, shots were fired," said a statement from Minnesota police on Mr. Castile. Translation: "Our officer shot a black man to death at a routine traffic stop." Similarly, in a statement expressing sympathy to the Sterling family, Hillary Clinton declared his killing a "police-involved incident," a phrase which could as easily describe a traffic ticket.

None of these cases are "police-involved incidents." They are killings of black men by police who fired fatal shots – and in the case of Mr. Castile, handcuffing his sobbing girlfriend, who had taped the killing, as if she, too, were suspect, while her four-year-old daughter tried to comfort her.

Video is supposed to be an antidote to these manipulative turns of phrase. Video shows the brutality of the police, the helplessness of their victims, and the pain of the witnesses. It is all clearly recorded, obvious to anyone with a trace of conscience or compassion. But as the case of Rodney King showed 25 years ago, there is no compassion for those deemed inherently undeserving of rights or even life. Justice comes from the willingness not to merely observe, but to acknowledge abuse, and to fight on behalf of the abused. When the abused are black, and the abuser holds the authority of law, compassion erodes into complicity.

There will be calls to black Americans to stay calm and conceal their rage at the slaughter. But the real question is why white America's reaction is not also rage and grief. Anger is not the same as hostility or violence. Anger on behalf of others is a form of compassion. One should ask not why black Americans are angry, but why so many non-black Americans remain unmoved.

Some Americans will deny the evidence in the videos out of willful blindness. Others will not see the details of the videos clearly through the tears in their eyes. Theirs is the perspective that should be prioritized.

Police shootings: Other U.S. and Canadian deaths that galvanized the public​
November 12, 2017 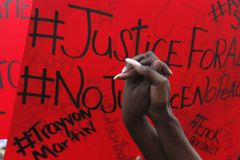 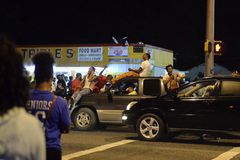