Naila Keleta-Mae is a professor at the University of Waterloo where she researches race, gender, theatre and performance.

Some people are livid that Black Lives Matter staged a 30 minute sit-in at Pride Toronto's marquee parade on Sunday afternoon.

Pride Toronto is the status quo in terms of representations of lesbian, gay, bisexual, queer and transgender communities in Toronto and the front-line activism that organizations like Black Lives Matter engage in isn't intended to comfort or reaffirm the status quo.

The undercurrent of much of the anger and frustration about Black Lives Matter's latest action is the perceived audacity of the membership to use the platform of their Honour Group status at Pride Toronto to publicly and dramatically critique Pride Toronto.

But when we think that any of our institutions – from LGBTQ organizations to police forces – are beyond scrutiny and public reproach then history tells us we have entered dangerous territory.

Canada has a violent history that is fraught with painful examples of what can happen when large institutions go unchecked; even well-meaning ones that are full of good intentions.

Black Lives Matter, a grassroots chapter in Toronto of an activist movement that spans North America, is part of a long tradition of front-line activism that spans generations, cultures and issues.

The group's demands are always lofty and its tactics are always attention-grabbing: from shutting down the Allen Expressway, to building a tent city in front of Toronto Police Services headquarters, to bringing a letter printed in large format to City Hall for city councillors to read.

Do their tactics expose already vulnerable communities to more vulnerability? Yes. Is their activism a sign of progress? Absolutely.

For some, progress looks like increased police presence, the first ever sitting Prime Minister marching in the parade, and heterosexual people at Pride wearing stickers that read "Ally." For some, progress looks like the list of demands that Black Lives Matter issued to Pride Toronto, things like: "self-determination for all community spaces," "a commitment to increase representation amongst Pride Toronto staffing/hiring," and "double funding for Blockorama + ASL interpretation & headliner funding."

For others, progress is a combination of these things. Progress is messy. Progress is fought for and fought over, especially when it takes into account the perspectives of a wide and disparate range of people.

But anger from the masses seems to be really centred on one thing: Black Lives Matter's demand for "the removal of police floats/booths in all Pride marches/parades/community spaces."

The irony of people rising up in 2016 to defend the police presence at Pride Toronto lies in the organization's history. When Pride Toronto started in 1981 it was as a riot against 150 police officers who raided gay bathhouses and arrested more than 300 men. The foundation of what is now known as Pride Toronto was essentially a sit-in. It was a protest. Thirty-five years later, Black Lives Matter staged a sit-in at the sit-in. They advocated within an advocacy group and that is familiar terrain for black people who have participated in social justice movements for generations across North America. There is a long history of grassroots black activists advocating for the concerns of marginalized people within mainstream efforts for equality across the continent.

Front-line activism rarely feels good for those whose lives and worldviews are interrupted or inconvenienced by public demonstrations of dissent.

But it is not the job of grassroots activists to make those who condone their marginalization and oppression to feel as though everything is fine.

Many have focused on the appropriateness and efficacy of the organization's tactics, but the real question is this: How will Pride Toronto's leadership respond?

In many ways, that is always the most important question whenever the mainstream is challenged because the response indicates the vision the organization has for itself and for the communities it represents.

For that reason, Pride Toronto's response is precisely what we should pay close attention to in the months and years to come. 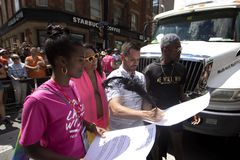