Rob Gordon is a Halifax-based journalist and a former crew member of the Bluenose II.

Seafarers are always a tad leery of a new crew member joining the ship. The fresh deck hand could be a "Jonah" – a sailor who brings bad luck to the ship. Things start going wrong: mishaps, equipment breakdowns, nasty seas, crew squabbles. To them, all are a sure sign there's a Jonah aboard.

It seems that Bluenose II has a Jonah or two. The two-masted schooner's never-ending refit has turned Nova Scotia's fabled icon into a national embarrassment.

Not so long ago, Bluenose's undefeated racing record reflected the best qualities of the Nova Scotian: It was nimble, wily, bold and independent. That legacy from the 1920s and 1930s has now been dashed on the rocks of bureaucratic bungling. Bluenose II is foundering in a sea of wasted millions and there is no plan to set the course true.

In 2009, the provincial Tory government of the day announced a grand plan to refit Bluenose II. The replica of the famed schooner was built in 1963 in Lunenburg, the same hallowed ground where the original racing-fisherman was built in 1921. Lunenburg shipwrights would sculpt the schooner back to ship shape in a bit over a year. It all seemed so natural, so right.

But the first Jonah was about to sign on.

The $14-million project would be managed by MHPM, an Ontario-based management company. Nova Scotia ship-building prowess would be tamed by a company that oversaw projects for Home Depot and Canadian Tire. The three seasoned Lunenburg shipbuilding companies that joined forces to tackle the heritage project would answer to MHPM.

The Bluenose build is now three years late and the costs have risen to nearly $20-million – and they may go much higher yet. MHPM is still the project manager; its fees have risen from $300,000 to $1.4-million.

Now another Jonah walks up the gangway.

Every Nova Scotian knows that the original Bluenose was designed by naval architect William Roué and skippered to victory by the wily Captain Angus Walters.

It became clear early on that the refit was much more then replacing plank for plank. The ship was ripped down to the keel, then even that was replaced. The only wood remaining from the 1963 vessel was the roll boards, which are used to keep crew members like me from being tossed from their bunks in heavy weather.

But if the province acknowledged that this was a total rebuild, or even the birth of a new Bluenose III, the kin of Mr. Roué would have to be paid for plans. Jonah donned legal robes and a lengthy, furious legal battle began – all based on the ridiculous notion that replacing Bluenose II's entire hull was not really building a new ship. The province recently settled with the Roué family and, of course, the cost and details are confidential.

The American Bureau of Shipping is a U.S.-based standards organization that ensures that huge steel freighters are built to a rigorous safety code. Months after the refit/rebuild/new construction began, the province decided that Bluenose II should be built to ABS standard. That's like calling in the building inspector after you've bought all your materials and framed the house.

The seas suddenly turned nasty and the crew began to squabble.

The experienced Lunenburg shipbuilders and the Houston-based ABS inspectors squared off. Methods and materials that had been used for generations in wooden schooners were banned by ABS. The shipbuilders were stuck with hundreds of thousands of dollars worth of materials deemed not usable. The project was swamped to the scuppers with red tape.

Every ship needs a rudder; it's how a vessel is steered. For hundreds of years, wooden ships like Bluenose have used wooden rudders to navigate the seas. But there will be no wooden rudder on Bluenose II – ABS demands a steel one. Trouble is, a steel rudder isn't buoyant like a wooden rudder.

Steering Bluenose II with a wooden rudder under full sail is effortless. There's a notch – a feeling, really – when the schooner heels into the sea and everything is tuned just right. Once in the notch, the 258-tonne ship can be steered by moving the wheel just a smidgeon to port or starboard. Perfect balance and finger-tip control achieved by centuries of knowledge and engineering.

Today, Bluenose's steel rudder can't be shoved hard over by two grown men pounding at the wheel. The recent media coverage of the rudder woes shows how profoundly the project has fallen off course.

After four years and $20-million, Bluenose II is forbidden to leave the dock. The ship can't be steered; there are concerns about its stability and safety. Some even predict it will never go to sea again.

When the original Bluenose was wrecked on a Haitian reef in 1946, it was called a national tragedy. What's happening on the Lunenburg docks in 2014 is also a national tragedy. It's a testament to what happens when a people contract out their heritage and turn their backs on history and experience. 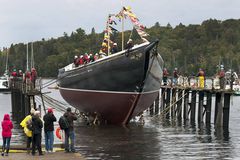 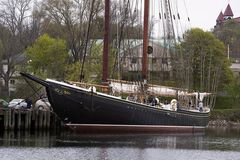 Rebuilding delays take wind out of Bluenose II's sails
May 11, 2014 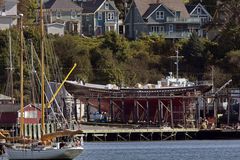