While the federal budget was sucking up most of the national oxygen this week, another financial plan tabled concurrently by the government of Saskatchewan deserved more attention than it received.

Premier Brad Wall is the conservative standard-bearer in the country at the moment. That is why his budget, which raised taxes by nearly $1-billion, is also raising eyebrows. This is the same politician, after all, who regularly castigates progressive-minded governments in Canada for introducing "job-killing" tariffs of all manner and description (see carbon tax).

Indeed, Mr. Wall has gone where few political leaders of his conservative ilk like to venture – increasing his province's sales tax to 6 per cent, from 5, as well as eliminating exemptions on everything from clothing to restaurant meals. Some suggest that when you factor in the areas that can now be dinged, the sales-tax hike is more like 3 per cent, not 1 per cent. Meantime, debt, the conservative's clove of garlic, will continue to increase for years.

It is an almost embarrassing admission of failure – or an admission, at least, that the Saskatchewan economy is failing.

Mr. Wall didn't abandon his ideology entirely though. He did enough slashing to maintain some of his conservative cred: throwing nearly 600 people out of work, while cutting funding on a range of groups and institutions, from libraries to colleges and universities. He even killed an entire bus company, one that services more than 250 small towns throughout the province.

The Premier has also indicated that he wants to cut public-sector compensation by 3.5 per cent.

This is what happens when you have an economy with an over-reliance on one product that suddenly tanks – in this case oil. Manitoba is dealing with the same problem, although to a lesser extent. So is Alberta, obviously, but the NDP government there has chosen to deal with its fiscal quagmire differently, avoiding the cutting and hacking that Mr. Wall and Manitoba Conservative Premier Brian Pallister have instituted.

Mr. Pallister recently introduced a bill that freezes wages for the public sector for two years and allows for negligible increases in the two following that. It is the same tough-love approach taken by the conservative-in-all-but-name Liberal government of British Columbia, which forced public-sector unions to take zeroes for a number of years before it was in a position to offer any wage improvements.

The reality is, what's taking place in Saskatchewan and Manitoba should have happened earlier. This is the fifth deficit budget Mr. Wall has introduced since 2007. He has known for some time the Saskatchewan economy was structurally unsound, that it didn't have the tax base to support things during the inevitable downturns that happen in the commodities world. Now he's having to burn some of the political capital he's stored up to fix the problem.

In Manitoba, a succession of NDP governments allowed public-sector wages to grow beyond the means of the province to fund them. They were underwritten, instead, by the effective use of a government credit card that was never being paid off.

Eventually, what we now see happening in the two provinces (and what we witnessed take place in British Columbia earlier) will have to occur in Alberta, where debt is accumulating at a historic and disturbing rate. Public-sector wages that were fuelled by the oil boom have grown beyond the province's ability to pay them. They need to be brought in line with Alberta's new, and likely permanent, reality – as uncomfortable as that might make some people.

Alberta's conservative parties – the Progressive Conservatives and opposition Wildrose – both talk about how they will slay the province's rising debt without taking a machete to public services or raising taxes, but that is fantasy talk.

Ms. Notley spoke about that this week, acknowledging that what took place in the Saskatchewan budget is "what it looks like when the rubber hits the road." And she is right. She has avoided making some of those same hard choices in her province. You could argue, the federal Liberals under Prime Minister Justin Trudeau have done the same thing with the two budgets they have brought in, including the one on Wednesday.

But eventually this catches up with governments. And they are forced to do things that are perhaps anathema to their own political philosophies.

And if you don't believe me, ask Brad Wall. He can tell you all about it.

Illegal border crossers arrested this year nearly half of all caught in 2016
March 21, 2017 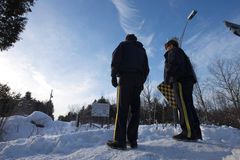