Shaista Aziz is a British freelance journalist who writes about race, gender and Islam.

Sadiq Khan, the British, Pakistani and Muslim son of an immigrant bus driver and a seamstress, was elected mayor of London last week.

In doing so, he made British political history by securing the largest number of votes for any individual political figure; more than one million votes were cast for Mr. Khan in a bitterly divisive and racially charged campaign orchestrated by the Conservative Party and its candidate, Zac Goldsmith.

By becoming mayor of London, Mr. Khan has also become the first directly elected Muslim mayor of a major Western capital. This matters. Much more than it should. And the fact that it matters speaks volumes about Britain, class, Islamophobia and racism in 2016.

Mr. Khan is British. He was born and raised in London, but it was his identity as a Muslim that was at the centre of one of the most toxic and insidiously racist political campaigns of recent times.

Even now, days after his win, the Islamophobia and innuendos from the Conservative Party and a number of political commentators continues seeping out. This is one open wound that is likely to fester for some time.

It took Prime Minister David Cameron more than a day to congratulate Mr. Khan on his victory. His Defence Secretary, speaking on BBC Radio over the weekend, refused to answer a simple question confirming London is safe under the leadership of a Londoner who happens to be Muslim. Chancellor of the Exchequer George Osborne defended the Conservative campaign against Mr. Khan as part of the "rough and tumble of democracy."

Mr. Khan's victory is a huge symbolic moment for working-class, British Muslims like me. I am the proud daughter of a Pakistani immigrant rail worker, who toiled hard all his life and raised his children to be proud of their Britishness. This is a huge moment for Britons grappling with everyday Islamophobia, which has become even more visible since the terrorist attacks in Paris and Brussels.

It is also a symbolic moment for British people looking for a way to bring communities together at a time of heightened anxiety about multiculturalism, Islam and identity. But in order to tackle growing levels of inequality and bigotry in Britain, we need to see more than symbolism.

A significant number of people who voted for Mr. Khan – an estimated 40 per cent – were not Muslim or members of London's ethnic communities. Londoners came out to vote in big numbers and rejected the politics of bigotry. This is something that must be built on and strengthened across the country if Britain is to become a country where all its citizens can thrive.

Like many British Muslims in the public eye, Mr. Khan will continue to be scrutinized by his "own" and accused of being too Muslim and too ethnic or of not being Muslim or ethnic enough. He faces a different level of scrutiny from non-Muslims and the rest of society, too.

Anyone who thinks this moment demonstrates how tolerant and at ease Britain is with its shifting demographics, ethnic minorities and Muslim population is deluding themselves. Now, more than ever, we are seeing Islamophobia and bigotry pouring out from the establishment. And now, more than ever, we need to roll up our sleeves and tackle that Islamophobia and bigotry at the root and work toward building a society that is truly inclusive. 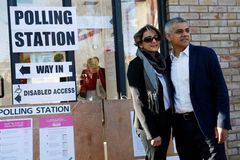