Ranjani Iyer Mohanty is a writer, editor, and commentator based in New Delhi.

I was in Delhi then, but I don't remember Dec. 16, 2012, as remarkable. It would probably have been a pleasant day in Delhi, with winter just beginning. In the evening, there would have been the usual hustle and bustle on the city streets, with people out on errands, visiting friends, and shopping for groceries. We were likely just returning from our usual Sunday visit to grandparents or perhaps getting ready for the week ahead. But once news got out of the horrific rape that happened that evening, it became a seminal moment in many people's lives.

Leslee Udwin's documentary India's Daughter re-lives the event. The Indian government has banned the airing of this documentary in India, saying that by interviewing one of the accused, it gives him a soapbox to explain his views. However, the film also shows interviews with the victim's parents, the defense lawyers, family members of the accused, and social activists. The government also implies that it's wrong to interview one of the accused while the case is still under appeal. However, it has been more than two years since the event, the crime and the perpetrators are indisputable, and the case has been idling in the Supreme Court.

Digging deeper, criticism of the film seems largely due to two reasons: the revisiting of a negative Indian event; and, to rub salt into the wound, the documentary was done by a foreign filmmaker.

Some critics say that the rape is old news. Why re-hash it? It simply serves to show India in a poor light. Two years on, perhaps they were hoping people would have forgotten the incident. They had swept it under the rug. But now the film is lifting up the rug and showing the dirt underneath to the whole world. In reality, one doesn't need to even lift the rug to see the dirt: it's all over the floor and quite visible. Rape is a real issue throughout India. And Delhi has often been referred to as the rape capital; rape cases are reported in the press with regular frequency, one of the latest being in an Uber cab.

In fact, under the carpet is not just dirt, but a trap door leading to a cavernous room full of a multitude of other issues all pointing to the secondary status of women in India. There is a long list of other forms of violence perpetrated against women over the course their lives, from the time they are yet unborn (female feticide), to birth (female infanticide), to when they are young girls (severely skewed sex ratio for children under age six), to teenagers (early school dropout, malnutrition, early marriage, anemia, molestation), to adults (dowry deaths, maternal mortality, abuse), and to the elderly (ostracism of widows).

India's Daughter was made by a British filmmaker, and that makes its unpalatable truth even more difficult to swallow. It brings up charges of orientalism and, in this case, the viewing of an Indian problem through foreign – or worse – colonial eyes. But the global interest in the case is not voyeuristic or paternalistic. Many people the world over can empathize with the young woman who was brutally raped and murdered; this student could well have been their daughter, their sister, or even themselves going to see a movie on a Sunday evening with a friend and coming back home on a bus. And if there are any objections to the quality of the film or the representation of the event, India now has the option to write its own history or story, and Indian filmmakers are free to make multiple portrayals of the December, 2012, rape as they see fit.

If the Indian government seems ashamed of this global re-hashing of this issue, their action is not towards creating a freer and safer environment for their women. It is to first kill the message; i.e., ban the film. And then, shoot the messenger; there have been some calls to ban BBC in India.

Foreign-produced films that revere India's heroes (like Attenborough's Gandhi) are most welcome. Cute films like The Best Exotic Marigold Hotel are heartwarming because they show foreigners finding themselves in India. Those like Slumdog Millionaire are somewhat unsettling but at least they have some catchy songs. On such a spectrum, India's Daughter is totally unacceptable. India seems to bloom gloriously with positive global recognition – such as when the little-known Satyarthi won the Nobel Peace Prize – but wilts frightfully under negative global scrutiny. What others think of us, in particular the West, seems to be of paramount importance – even more important than trying to resolve the very real issues being faced. Although it gained independence more than 60 years ago, India has not yet cast off the mental colonial yoke.

In reference to how a girl should behave while being raped, the accused who was interviewed said, "She should just be silent." Perhaps that's the same message the Indian authorities who banned the film are sending to Ms. Udwin, if not to the world.

India can choose an isolationist policy; for our problems, only our perspectives count. But that's very difficult and possibly even harmful in today's world where we're all so interconnected via travel, tourism, business, finance, communications, entertainment, aid, and trade. People's concerns are borderless; just as Je Suis Charlie Hebdo, Main India's Daughter Hoon [I am India's Daughter]. Their art, work, and profit-making initiatives are also borderless. We're naive in thinking that in this global community only we are authorized to tell our story. We have every right to tell our version of it, but we'll have to compete with others – regionally, nationally, and internationally – to do so. 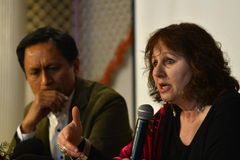