Thomas Huxley, the eminent self-taught scientist and one of the great intellects of 19th-century Britain, called William Ewart Gladstone, four times chancellor of the exchequer and four times prime minister, "the greatest intellect of Europe." And Huxley was a critic. Beyond all argument, this great liberal champion of laissez-faire was a smart man. By the end of his more than 60 years in public service, he had acquired a personal library of 32,000 books; by his own reckoning, and he was precise in his records, he had read 20,000 of them. But he wasn't merely smart. He was right. Democracy, he said, was a spendthrift affair. He governed accordingly.

More than any other British leader, Gladstone can instruct Prime Minister David Cameron on the way to pay down the national debt - yet win admiration and respect from a dubious electorate that doesn't quite think he's up to the job. With a few basic principles as his guide - all of them more practical than theoretical - Gladstone paid down the massive debt incurred in the Napoleonic Wars. With the same principles, Mr. Cameron should be able to take care of a smaller debt with relative ease.

Lord Morley, friend and biographer of Gladstone, wrote of the Grand Old Man's "passion for economy, his ceaseless war against public profusion, his insistence upon the rigorous keeping of the national accounts." Gladstone cut taxes repeatedly. He reduced or eliminated scores of miscellaneous taxes. Marginal rate cut by marginal rate cut, he lowered the country's income tax rate (to 1.25 per cent). Given one more term in office, he probably would have eliminated it. (He was 84 when he delivered his final speech in the Commons.) He rescinded tariffs - often unilaterally. Indeed, by one count he abolished more than 1,000 of them - 95 per cent of Britain's tariffs. He balanced the budget and, more often than not, produced large surpluses to pay down debt. He preferred, he said, to let money "fructify in the pockets of the people" rather than waste away in the public purse.

It's no wonder that the British public came to adore "G.O.M." - or, as his imperialist Tory opponent Benjamin Disraeli jealously pronounced him, "God's Only Mistake." Winston Churchill and Margaret Thatcher aside, it's no wonder that most of his successors in the 20th century looked, in comparison, so very small and so very inadequate. Mrs. Thatcher, for her part, observed that the great Liberal statesman would have "felt right at home" in her Conservative party in the 1980s. Perhaps. By Gladstone's standards, though, Mrs. Thatcher was spendthrift herself.

With its constant clamour for foreign wars, 19th-century Britain provided Westminster with plenty of plausible excuses for going back into deficits - temporarily, of course. Gladstone, though, permitted no borrowing to fund these episodic misadventures. For a live-or-die war, he would have gone deeply into debt. For optional wars, he made Britain pay as it went. For these wars, indeed, he raised taxes. Of the taxes he raised to finance the Crimean War (1854), Gladstone declared: "The expenses of war are the moral check which it has pleased the Almighty to impose on the ambition and the lust for conquest that are inherent in too many nations."

In 1815, at the end of the Napoleonic Wars, Britain owed a debt equal to 250 per cent of its GDP, the highest level that the country has ever recorded. Ironically, a century later, post-Gladstone, it had paid down this debt (to a modest 25 per cent of GDP) - just in time to embark on the global wars of the 20th century. By this fiscal discipline alone, Britain survived. Without it, the country would never have made it through the First World War - nor the Second World War, either - without utter economic disintegration.

There are only four ways for countries to get out from under massive debt. They can inflate. They can default. They can pay down the debt over time. Or they can grow their economies at a faster pace - which makes the debt shrink in proportion to a country's national wealth.

Gladstone's genius was to repudiate the first two options as immoral and to embrace the latter two as practical. He produced fiscal surpluses and used them to pay down debt. He reduced taxes to promote a higher rate of economic growth. This two-track strategy produced incremental increases in revenue, which he used to finance the next set of tax cuts - which yielded more economic growth: a virtuous spiral that returned ever-larger revenues to the Treasury and which ultimately made Britain the wealthiest country in the world.

Britain is now on its way toward a national debt of Napoleonic proportions. The Swiss-based Bank for International Settlements, the bank that serves the world's central bankers, calculates that Britain's debt will eventually rise to 200 per cent of GDP. Mr. Cameron can handle it - provided he heeds Gladstone's famous warning words: "Nothing that is morally wrong can be politically right."

Despite its deficit, Britain has gone through worse
May 12, 2010 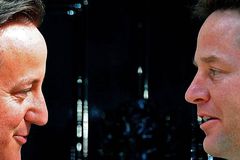 Opinion
The building blocks of education shouldn't cost this much
May 2, 2010