Tom Flanagan is professor emeritus of political science and a distinguished fellow at the School of Public Policy, University of Calgary. He was also a campaign manager for conservative parties.

New Alberta Premier Jim Prentice is taking steps to restore the Progressive Conservative government's reputation for integrity and frugality. He appointed a cabinet of just 20 ministers, omitting those whose reputations had been most tarnished in the era of Alison Redford. He also included two high-profile people from outside the legislature, who will seek seats in fall by-elections. And he has announced the sale of the government's fleet of aircraft, misuse of which was the pretext for the party to dump Ms. Redford.

Such measures are, as philosophers say, necessary but not sufficient. To win re-election, Mr. Prentice and the PCs will have to resolve a strategic dilemma that has been building for several years. About half of the PCs' long-term voting base has gone over to the Wildrose Party, which offers a more consistent conservative ideology. In spite of that massive defection, the PCs were able to win in 2012 because Ms. Redford attracted new support from the centre-left, promising new spending on schools, hospitals, clinics and other infrastructure. Public-sector unions reacted with enthusiasm and helped orchestrate a scare campaign against Wildrose, which was vulnerable to charges of extremism.

The Liberals' vote share fell from 26 per cent in 2008 to 10 per cent in 2012, because large numbers of normally centre-left voters swung to the PCs to block Wildrose and cash in on Ms. Redford's promises. The 2012 electoral coalition of the nominally conservative PCs resembled that of the Liberal Party of Ontario. As the Ontario Liberals have shown, such a coalition can be a winning formula, at least until the money runs out, but the Alberta PCs seemed unsure of how to handle it. Once back in office, they turned on their new public-sector supporters, bringing in legislation to remove binding arbitration for the core public service, banning strikes in areas such as health and education, and making it illegal for unions even to discuss an illegal strike. The legislation enraged the left, which felt betrayed by Ms. Redford, but it didn't bring back the right, as Wildrose also found reasons to criticize it.

Losing support on both left and right, the PCs were like a barrel tapped at both ends. Sagging poll numbers caused the caucus and party to withdraw support from Ms. Redford, citing her alleged extravagance, and the rest is history. Now Mr. Prentice will try to put Humpty Dumpty together again. But it's not so easy.

Alberta's right-wing and left-wing voters have conflicting priorities. The right wants balanced budgets with no tax increases. The left wants greater infrastructure spending and enriched government services, with borrowing and even tax increases if necessary. If resource revenues spike upward (always a possibility in the volatile world of oil and gas), it might be possible to satisfy both at the same time; otherwise, the government will have to choose.

Ms. Redford appeared to choose left but veered right after the election, causing her new supporters to feel betrayed. Will Mr. Prentice swing back to the left in an effort to undo the damage? Or will he balance the budget and make a determined play for the PCs' lost right wing, even though those voters have been sitting with Wildrose for several years?

It's an existential choice. If the PCs guess wrong, if they don't get back either the left or the right, they won't have enough votes to win in 2016, and their years in government will be over. Mr. Prentice's statements thus far suggest he intends to swing left, with further borrowing to finance more spending on infrastructure. In spite of Alberta's enormous resource revenues, we seem bent on joining Ontario as a province of chronic deficits and ever-growing public debt.

Jim Prentice already giving off scent of a leader
May 12, 2018 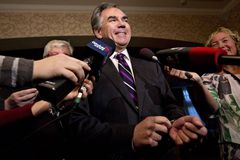