"The last temptation is the greatest treason:
To do the right deed for the wrong reason."

-T.S. Eliot, Murder in the Cathedral

It would not be treason, but it would certainly be lèse-majesté for the Supreme Court of Canada to reject the Harper government's appointment of Justice Marc Nadon for the country's highest court.

Only the Supreme Court can do now what the government, the House of Commons committee and frankly the entire legal community of Canada failed to do: Protect the integrity and uphold the highest standards for appointments to the Supreme Court.

Wednesday morning, the Supreme Court will be asked by the government of Quebec and a Toronto lawyer to block Justice Nadon's nomination. They will argue that, as a Federal Court of Appeal judge, he has not been a member of the Quebec bar for the past decade. Nor is he from Quebec's highest provincial courts (as stipulated in the Supreme Court Act). Therefore, he should not be appointed.

No one can ever predict how the Supreme Court will rule. These objections could seem plausible, but only with a narrow statutory interpretation, because Justice Nadon was a member of the Quebec bar before he had to leave it to join the Federal Court. Moreover, declaring Federal Court judges from Quebec ineligible from consideration for the Supreme Court because the statute makes no specific reference to that court might be textually correct, but a circumscribed interpretation.

The issues at bar Wednesday are a distraction from the main objection: that Justice Nadon's career offers nothing of sufficient distinction to merit him being on the Supreme Court.

He is being appointed for a simple political reason: Prime Minister Stephen Harper's government scoured Quebec for someone they hoped would be judicially conservative and respectful of government arguments. In this appointment, as in some others to lower courts, the government is playing out its distaste for what it considers "activist" judges and courts that "read" too much into the law.

Justice Nadon intended to become a supernumerary judge on the Federal Court of Appeal – a part-time judge, in other words, hardly a commendation for a new job that demands intense and sustained work.

None of his work on that court caught anybody's imagination. One analysis of his judgments revealed that of 12 cases he wrote for the majority that were appealed to the Supreme Court, nine were overturned – in one case, involving natural resource extractive industries, by a 9-0 majority.

This case places the existing Supreme Court justices in an invidious position that they have every right to resent. They are being asked to rule on the legitimacy of the appointment of a future colleague, an awkward situation to say the least.

As distinguished jurists, they know that someone who had sought to become a supernumerary judge might not be up to the Supreme Court's workload.

Every one of them would laugh at Justice Nadon's explanation that he wanted to go supernumerary to give him more time to reflect on complicated cases. Moreover, they, and especially outstanding Chief Justice Beverley McLachlin, are deeply committed to preserving the court's independence, political neutrality and highest performance standards. They know what the government is trying to do with this appointment, but can they find a legal reason to stop it? Would that be the "right deed for the wrong reason"?

What this appointment reveals is troubling for other reasons beyond the government's attempt to politicize the court.

We now know that Canada cannot stop a government intent on making inferior appointments. No one thought any mechanism to prevent such appointments was necessary, because governments would only appoint from among the best and the brightest.

Here, it has been alarming to observe the cone of public silence (despite widespread private dismay) from the entire Canadian legal community, including tenured academics, retired judges, bar associations and law societies. With a few notable exceptions, their clubby silence has been the "greatest treason" to the law. 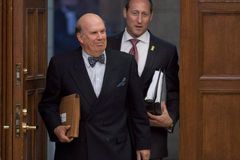