On May 3, the United Nations Security Council will consider a resolution calling on members to reaffirm their obligations to protect the wounded and sick – and their caregivers – in conflict zones. It is essential that this resolution not only pass, but that it be robustly implemented.

It should not be necessary for signatories to agreements such as the Geneva Conventions to be reminded that patients and health structures must be protected in conflict. Medical organizations such as Médecins Sans Frontières (MSF) rely on international humanitarian law, which creates the protected legal space in which doctors, nurses and staff can care for war's most vulnerable victims. But recent months have shown that even such fundamental norms are being increasingly transgressed.

Last week, an MSF-supported hospital in Aleppo, Syria, was destroyed by direct air strikes, which killed 14 people, including patients and doctors; and a Canadian-funded health clinic in the city was reduced to rubble by air strikes on Friday. These were just the latest attacks on health facilities in Syria, which has seen medical care coming under fire to an appalling degree during more than five years of war.

Beyond Syria, MSF facilities in Yemen and South Sudan have been attacked multiple times in recent months. Last October, our hospital in Kunduz, Afghanistan, was hit by U.S. military air strikes, which killed 42 people, including 14 MSF staff members. These outrages represent only a small fraction of the attacks against health-care providers in conflict zones around the world.

Over the past six months, four of the five permanent members of the Security Council have been associated with military coalitions that have bombed hospitals and clinics, despite their legal commitments to prevent such attacks from occurring. Civilians are being killed and medical facilities destroyed; doctors are risking their lives to do their work and patients are too terrified to seek care.

This cannot continue. If we allow the leading member states of the global community to treat the Geneva Conventions as matters of convenience, then we will be turning our backs on the humanitarian imperative to reduce the suffering caused by conflict.

This new resolution is an opportunity to show that even war has rules. It must reaffirm existing obligations under international law, reassert the protection of the wounded and sick, no matter who they are, and include accountability mechanisms such as independent investigations and regular UN reporting on incidents. Failing to include these measures will result in yet another resolution doomed to meaninglessness by lack of oversight, lack of enforcement capacity and, fundamentally, a lack of political will to make it work.

A seismic shift is needed in our application of humanitarian principles on the global level: Rules must be enforced and violators held to account. Such a shift will not come about easily. It requires strong political, diplomatic and moral leadership, and a willingness to stand up for our greatest shared aspirations for humanity.

The Canadian government has made welcome signs of support ahead of Tuesday's vote, and it is reassuring to hear its leaders speak publicly about our country's role in a strong and principled multilateral international system. This is an opportunity for Canada to take meaningful action, and to lead by example: The government is conducting reviews of its priorities for defence and international development. By ensuring that our international humanitarian obligations will be at the heart of Canadian policy, we can not only demonstrate our own commitment to these principles, but also take the lead on reasserting their primacy at the global level.

The new resolution is the work of five non-permanent members of the Security Council. They are using the UN system to remind the council's permanent members, and the world at large, of their commitments under international law. Canada, too, can take its place at the forefront of these efforts: We can hold our allies to account for their actions, lead by example and refuse to accept the continuing assault on humanitarian values.

Thanks to agreements such as the Geneva Conventions, organizations such as MSF are able to bring relief to vulnerable people in conflict zones around the world. That ability to intervene safely and provide lifesaving care is what's at stake.

If we don't stand up to defend it now, we run the risk of losing it forever. 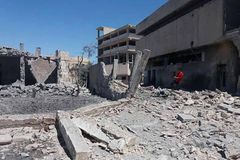