When reading about the tragedy of the Desmond family in the Globe on Saturday, one can only wonder "why?" Why did former soldier Lionel Desmond kill his wife, mother and 10-year-old daughter? Why in a country like Canada, rated second for quality of life, has the Desmond family suffered such a devastating fate?

While I won't speak to the specifics of the Desmond tragedy, I will speak to the broader issues of what the government should, and could, have done to mitigate such incidents from happening. I do so from the perspective of a 32-year Canadian Armed Forces (CAF) veteran and former sergeant major of Lionel Desmond's last CAF unit, the Joint Personnel Support Unit (JPSU).

The JPSU was meant to be a national (coast-to-coast) organization to support those who were injured to a degree requiring a convalescence of six months or more, or facing medical release from the CAF. It was launched in 2008 at the height of the Afghanistan War. Twenty-four support centres and eight satellite centres are located at bases across the country.

The JPSU was formed in response to an oversight of CAF military planners: They forgot to develop a plan to deal with those injured in Afghanistan. The CAF's ability to support its injured service members had eroded over the years.

In 1961, the CAF had a centralized state-of-the-art National Defence Medical Centre (NDMC) that catered to military personnel, veterans and select VIPs – such as the prime minister, governor general or minister of national defence – across Canada. Ironically, in 2001, the beginning of the Afghanistan War, the facility had declined to a point where it only serviced the Ottawa area, and the decision was made to close it for cost reasons.

In 2008 – as the casualties from Afghanistan mounted – the CAF recognized their oversight, and the JPSU was born.

But only a very small percentage of the injured personnel transferred to the JPSU were injured in Afghanistan, and JPSU became a lifeboat filled to the gunwales. In response, the mid-level leadership of the JPSU requested a staffing equation based on decades of "lessons learned."

"Lessons learned" are part of the finalization process of a CAF military operation. It is meant to ensure mistakes made in past operations aren't repeated in the future. Among the foundational lessons learned is the structure of military organizations such as teams, groups, sections, platoons, companies and regiments, and the proper ratio of leaders to those who are led.

An element of what is lacking in the support of injured and ill soldiers, veterans and military families is that the CAF isn't taking heed of those foundational lessons about structure, staffing and training.

For example, a military "section" normally has 8-10 healthy people in it, but in the JPSU, that number went up to 70 injured and ill people (and their families). The JPSU itself was designed around a unit structure normally located on a military base or garrison, but the JPSU unit spanned all of Canada, making oversight impossible.

In my own experience as a JPSU sergeant major, I asked for PTSD-specific training, so my staff could understand the complexities of supporting soldiers with the condition. However, this training was denied by the JPSU Commanding Officer over liability concerns. So the JPSU staff at the lower leadership levels (sergeant to captain) had to figure it out on their own, while coping with sky-rocketing increases in the number of injured soldiers and their families. Eventually, control and awareness was lost, and crisis management became the order of the day.

The Desmond family is associated with the casualty rate – which refers to any injury to or illness of an officer, whether or not it is fatal – of the JPSU, not necessarily because the JPSU could have prevented what happened, but because the JPSU leadership didn't do nearly enough to mitigate these types of tragedies from happening. Instead, the CAF lauded the JPSU and defended the unit's effectiveness despite internal, external, independent and media reports to the contrary.

The government also had access to these reports, but rather than fulfilling their role as civilian overseers of the CAF, they capitulated, and continue to capitulate, their responsibilities to senior military officers who have failed their ill and injured troops time and time again.

That raises a far more complicated question, as this capitulation has resulted in additional pain and suffering to ill and injured soldiers and veterans while putting them, and their families, at increased and unnecessary risk.

It's not lost on soldiers that the boldness, money and energy which flows freely when placing them into harm's way quickly evaporates should they return home broken, demoralized and exhausted. Once a soldier is injured, the government and the CAF become risk-averse, stingy and timid, but the soldier, obeying orders, dare not speak about it.

Lionel Desmond served Canada true to the oath that he took on his induction to the CAF, and he and his family served this country honourably. His country, on the other hand, served him, his comrades and his family disgracefully when they most needed support. Lionel and his family should be at home in Nova Scotia around a campfire sharing laughs, love, stories and thoughts of their future.

One can only wonder why they aren't there now.

Well perhaps the answer is that the Canadian government and the CAF continue to dither on an effective injured transition program while leadership, money and energy abounds as they prepare to deploy our forces for NATO and peacekeeping operations. And in doing so, they are disregarding the lessons of 100 years of experience, the lessons of Afghanistan, the lessons of the JPSU and now the tragic lessons of Upper Big Tracadie, N.S.

More importantly, the federal government must reassert its role as civilian overseer of the military and order the CAF to provide it with a seamless transitional support system between the CAF, Veterans Affairs and provincial governments. All the infrastructure and funding is there; the only thing missing is compassionate leadership and the intangibles of respect, honour and ethical support of Canada's protectors, such as Lionel Desmond and his family. 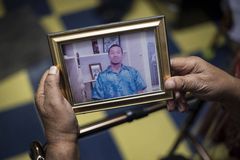 Nova Scotia health authority will meet with Lionel Desmond’s family, sister says
June 19, 2017
Calls grow for inquiry into veteran's triple murder-suicide
June 18, 2017
Follow us on Twitter @globedebate Opens in a new window
Report an error Editorial code of conduct
Due to technical reasons, we have temporarily removed commenting from our articles. We hope to have this fixed soon. Thank you for your patience. If you are looking to give feedback on our new site, please send it along to feedback@globeandmail.com. If you want to write a letter to the editor, please forward to letters@globeandmail.com.
Comments