In the mid-1940s, Canada was a principal founder of the United Nations and a Canadian drafted the Universal Declaration of Human Rights. Since then, Canada has built an exceptional international reputation with its commitment to multilateral approaches and solutions to international conflicts.

In 1957, the role of Lester Pearson, then minister of external affairs, earned him the Nobel Peace Prize for developing a solution to end the Suez Canal crisis by proposing a peacekeeping force, the famous Blue Berets. In 1965, Prime Minister Pearson named me as his parliamentary secretary and appointed me to his cabinet two years later.

Under Mr. Pearson's leadership, Canada called for the end of the bombing of North Vietnam to allow for negotiations to end the conflict. Although armed conflicts are sometimes unavoidable, Canada has traditionally sided with countries that sought peaceful solutions. If, however, there were a NATO or UN mandate for military intervention, as was the case in Iraq in 1990 and a few years later in the former Yugoslavia, Canada always stepped up to meet its international military responsibilities and obligations.

Under Prime Minister Pierre Elliott Trudeau, Canada pursued independent foreign policy. In 1970, his government established diplomatic relations with China, ahead of the United States. Canada also blazed its own trail, as Mr. Trudeau was among the first to support the struggle of Nelson Mandela against apartheid in South Africa.

Progressive Conservative Prime Minister Brian Mulroney and Joe Clark, his foreign affairs minister, took the lead in the struggle against apartheid and the movement to free Mr. Mandela. On this point, Mr. Mulroney was not afraid to stand up to Margaret Thatcher and our close ally, Britain. He rightly saw that they were wrong.

Canada has managed to assert repeatedly both its independence and its commitment to international institutions such as the UN and NATO in international relations.

Working within this framework led Canada, during my mandate, to play leading roles on issues such as the Ottawa Treaty, an international convention on the ban of anti-personnel mines, and the establishment of the International Criminal Court. In this same spirit, we also signed the Kyoto Protocol on climate change.

In 2003, to the dismay of our American and British allies, we refused to go to war in Iraq because the UN refused its consent to what is now universally acknowledged as a big mistake. Canada was noticed and respected for this decision.

However, since then something has happened to Canada's international reputation. I fear it has been altered and damaged for a long time. In 2010, for the first time, Canada's bid for a seat on the Security Council of the United Nations was defeated. The next year we sent our planes to bomb Libya, and we are now participating militarily in Iraq and Syria.

After the campaign in Libya – which we now know had disastrous consequences in the region – the Harper government trumpeted Canada's bombing role with a flyover above Parliament Hill to celebrate our "victory." This is a ritual normally characteristic of conquering and warlike countries.

Today, with great sadness and shame, I am watching Mr. Harper's cold-hearted reaction to the tragedy of refugees from Syria and Iraq. German Chancellor Angela Merkel has stepped up to the plate, and the world looks upon the generosity of her country with admiration. The same goes for Norway, Sweden and Finland, which have welcomed refugees and do not erect roadblocks to taking them in. Instead they get rid of roadblocks. But not Mr. Harper. He has shamed Canada in the eyes of Canadians and of the international community.

I am sad to see that in fewer than 10 years, the Harper government has tarnished almost 60 years of Canada's reputation as a builder of peace and progress. During all these years, government leaders, whether Liberal or Progressive Conservative, have sought to understand, engage and influence their international peers, including those with whom they disagreed. They did not try to embarrass or give other countries lessons in good behaviour. Rather, they patiently sought to convince others of the universal values that make our global community a better and safer place to live.

Of course, peaceful dialogue does not always work. War is sometimes unavoidable. But solutions should come from the world community working together – not from a handful of countries acting outside international institutions to which they belong.

Canadians will soon choose their next government. When considering the role of Canada on the world stage, I hope they will choose a government in line with our great tradition of peace-building, initiated by Mr. Pearson and promoted by all of his successors until the arrival of the Harper administration.

Let's take back our place in the world. 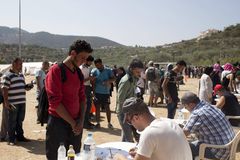 Opinion
Mr. Harper, this refugee crisis should be your moment
September 8, 2015

It’s not too late for Harper to play the statesman
September 8, 2015
Follow us on Twitter @globedebate Opens in a new window
Report an error
Due to technical reasons, we have temporarily removed commenting from our articles. We hope to have this fixed soon. Thank you for your patience. If you are looking to give feedback on our new site, please send it along to feedback@globeandmail.com. If you want to write a letter to the editor, please forward to letters@globeandmail.com.
Comments