The threat of a strike may have passed, but stay tuned for a lot more controversy surrounding Canada Post in the coming weeks.

First up, the advisory panel on the future of the post office, created by the Liberal federal government, will issue its findings. Its job is to tell the government how to live up to its election platform – remember, the Liberals promised to "stop Stephen Harper's plan to end door-to-door mail delivery." (It was the post office's plan, not Mr. Harper's, but whatever.) The government also says it won't privatize Canada Post, but everything else is on the table. The panel is supposed to report by the end of the summer.

In the fall, a parliamentary committee will hold cross-Canada hearings. And then the Trudeau government has to figure out what it wants to do – and what it is going to order Canada Post to do, or stop doing. Also some time this fall, the Ontario Court of Appeal will likely release its decision on the dispute that started all of this: Whether Canada Post has the right to plunk down thousands of home-delivery-replacing communal mailboxes wherever it likes, even in the face of opposition from residents and cities. (Remember Montreal mayor Denis Coderre and his jackhammer?)

That court decision matters because Canada Post's original plan to save money – by ending home delivery – depends on its power to steamroll unwilling local governments, forcing them to accept new facilities on their land, rent-free. That power was given to the company by federal law, crafted back when Canada Post's core business was delivering mail. But that's not what the world looks like anymore.

Related: The Canada Post feud: Five things to know about their bottom line and the future of mail

The Canada Post of today sees itself as an e-commerce fulfilment company. It has a profitable and growing franchise delivering packages to people who shop online – that's the future it's planning for. It also turns a profit on courier services, logistics support for businesses and junk mail. In 2015, Canada Post delivered 4.9 billion pieces of junk mail – or about 1.2 billion more items than it delivered in the mail category.

That's because regular mail is a business in rapid decline. Most of the volume has always been utilities and banks, sending out monthly statements and bills. And every year, more of us realize that we don't need to get a physical hydro bill, or return payment by cheque. That's why the number of letters has fallen by more than a third over the past decade.

It's also why the company's annual report says that, "for Canada Post, 2016 will be another crucial year in transforming the business from a mail-centric model to a parcel-centric business."

I'm not unhappy about any of this, and I suspect most Canadians are in the same boat. We don't hate the post office; we just don't use it as much as we used to. It's a question of changing technology. We aren't relying on a 19th-century letter-delivery system to tell us, a month from now, what we did in our online bank account last night.

You can't blame Canada Post managers for recognizing reality. It's no surprise they want to focus on what makes money – packages, courier services and junk mail – while cutting costs in the shrinking business of delivering one-price-regardless-of-destination letters.

The only thing I'm mad at Canada Post about is the thing that caused Mr. Coderre to go ballistic. Crowded urban neighbourhoods simply don't have room for the thousands of ugly super-mailboxes Canada Post wants to drop on them. In suburbia, they're an inconvenience, but in a city, with so many more residents per block and so little public space, they and the litter they spawn (tribute to the company's success in junk mail) will be major eyesores. Canada Post's money-saving strategy is actually Canada's most ambitious urban de-beautification program. And that plan is only possible because the law currently gives Canada Post a benefit enjoyed by no other business: It can take over public land, free of charge. Any other business would have to rent real estate. And if Canada Post had to rent the space for its superboxes? Its savings from ending home delivery would evaporate.

If that happened, Canada Post would turn to its next best option: keeping home delivery, but reducing its frequency. That's what New Zealand Post did last year, switching from daily to three times a week for regular mail – while keeping daily drops for higher-priced and profitable package, business and courier mail.

The Liberals should let Canada Post pick up that option and run with it. 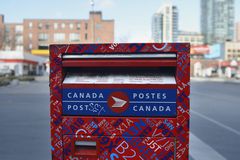