António Guterres is the United Nations High Commissioner for Refugees.

Since Canada's act of confederation almost 150 years ago, Canadians have a proud record of opening their arms to those seeking a new beginning. Canada helped create the Office of the United Nations High Commissioner for Refugees and is party both to the 1951 Refugee Convention and to its 1967 Protocol. This country has a long history of humanitarianism, having taken in Hungarians, Vietnamese, East African Asians, Somalis, refugees from the Balkans and countless others in their time of greatest need.

More recently, refugees from Iraq, Bhutan, Myanmar and Afghanistan have found a safe home in Canada thanks to your resettlement programs and to the generous sponsorship of countless individuals and groups. And in recent weeks, as your government announced measures to accelerate the acceptance of 10,000 Syrian refugees by the end of 2016, local communities mobilized to offer private sponsorships for others.

The world needs Canada's help like never before. The world is facing its largest displacement crisis since the Second World War. Around the world, almost 60 million people, more than one and a half times the entire population of Canada, have been forced to flee their homes as a result of conflict or persecution. The list of humanitarian crises stretches from Syria and Iraq to Yemen, Libya and Afghanistan, from South Sudan to Burundi, Somalia, the Central African Republic and many others.

The role of UNHCR is to provide protection for refugees and to help find solutions to their plight. On both counts, we are tested as we rarely have been in our 64-year existence.

There is no end in sight to the nightmarish mayhem in Syria, which has killed hundreds of thousands of innocents, displaced more than eight million Syrians within their own country and driven more than four million to become refugees abroad. Every refugee carries an individual story of sorrow, of loss, but of humanity and rare grit too. They need – they deserve – urgent support.

The countries of asylum that neighbour Syria – primarily Turkey, Lebanon and Jordan – have generously opened their doors, but find themselves under increasing stress. Jordan and Lebanon especially, small countries of a few million people, are feeling the strain of accommodating hundreds of thousands of Syrian refugees, which impacts not only their exchequers and economies, but also the very warp and weft of their delicate social fabric.

Yet UNHCR, together with our many partners, has been struggling to maintain our refugee services – shelter, food, health care, life support. The 2015 regional appeal for Syrian refugees is funded at just 41 per cent. Although significant new support was announced just over the last few days, huge gaps still remain to meet the needs of millions of increasingly vulnerable people.

The funding shortages this year have been a crisis for humanitarian organizations, but they have been nothing short of disastrous for refugees. With reduced food assistance, basic services at risk and winter just around the corner, living conditions in the region have been deteriorating rapidly, with the vast majority of refugees living in deepening poverty, unable to work or send their children to school. It is no surprise that growing numbers of Syrians have been looking further afield for survival, forced to risk their lives and those of their children on unsafe boats and at the hands of ruthless smugglers. These people are fleeing one of the most brutal conflicts in recent history. They urgently need safe and lasting solutions.

The world cannot afford to deny support to the growing tide of refugees and to the struggling neighbours of today's conflict zones who take in 86 per cent of those who flee abroad. It cannot afford to feed the mounting sense of exclusion and hopelessness among many of today's refugees – a feeling that can lead to desperation and alienation. This flow of human beings, each with dreams and rights just like all of us, is already becoming a defining issue of this century. Our international community – and it is a community, with common interests and a shared destiny – has to develop a coherent, strategic response – quickly.

Refugees everywhere deserve our attention and our support to start a new life. Let us not leave Syrian refugees cast adrift in limbo. Canada, thank you for what you have done, for what you are doing – and for what you will do in the future. This country has a critical role to play, both in providing more help to the world's displaced and in welcoming more of them to your safe shores. 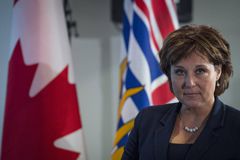