Cecil Foster is a Canadian author and a professor at the State University of New York at Buffalo. His latest book is Genuine Multiculturalism: The Tragedy and Comedy of Diversity.

"Because it's 2015," our newly minted Prime Minister said in a statement heard and applauded around the world. Justin Trudeau was responding pithily to a question on why he would set aside half of his cabinet positions for women. And then he went on to boast about a diverse new cabinet that reflects Canada itself. In the language of multiculturalism, there is recognition of the diverse groups that make up the new Canada.

But something is missing from this cabinet, from this reflection of the Canada of 2015. There are no people that look like me or my children or my grandchildren, despite there being at least six Liberal caucus members with Caribbean and African immigrant backgrounds. Once again, blacks and blackness are invisible.

It is as if there is no black in Canada. Maybe despite all its diversity Canada in 2015 is still a white man's country, where as in time of old all eligible and desirable non-whites and males have been co-opted into whiteness. Just like the Italians, Greeks, Ukrainians, Afghans, etc. that are now all white Canadians. Diversity through assimilation. And as has always been the case, the one unassimilable group – primary because of the colour of skin and the historic outsider status – is blacks. And this is at a time when south of the border there is a black president. Maybe it is true that Canadian and U.S. cultures and politics are fundamentally different.

It is unbelievable that at this moment when diversity is the language and imagery of Canada, yet again we have been told in the jargon of street that if you are black, stand back. If there has been two groups that have been the measure of exclusion and marginalization in the Canada of old they were First Nations people and blacks. It is a moment of pride when we can see First Nations representation in the Canadian government, especially for me a First Nations Justice Minister and Attorney-General.

But whether it was as the original Loyalists that withdrew into what would become Canada, blacks were always part of this country and we have always been the moral conscience of this country. Indeed how can anyone begin a conversation on power, citizenship, multiculturalism, equity, a Charter of Rights and Freedoms, criminality, discrimination and police carding without starting that conversation about historically what has been the role and positioning of blacks generally in this hemisphere and specifically in Canada?

So why are there no blacks in the cabinet? Perhaps because the cabinet was chosen on merit and no black was good enough. Perhaps no one ethnic or racialized group should be signalled out for special attention. Perhaps affirmative action should not be a factor. Perhaps …

As the Prime Minister stated, the year is 2015. All these questions can be posed about any visible-minority group that is using the pictures of members of their community who are federal government ministers to tell their young see you, too, can become a government minister. For it to be really true, as our Prime Minister implied, that Canada has come a long way when any argument against the inclusion of any ethnic, racial, gendered or sexed group is so absurd that no real explanation is needed. Unless this inclusion is about other minorities, not blacks.

Unfortunately, there is the sense that the blacks in Canada have been slighted. And ironically this is one of the ethnic groups that have resolutely remained faithful politically to the Liberal Party of Canada in good and bad times, even when other ethnic groups with less of a legacy in Canada flirted with and even shifted support to other parties. Most enthusiastically support multiculturalism. Many in the black communities across Canada still revere Pierre Trudeau. What more needs to be said about loyalty or blacks and Liberals.

About two decades ago, I published a book titled A Place Called Heaven: The Meaning of Being Black in Canada. Back then. I was writing about an ethno-racial group that is as old as Canada itself, that for want of a better phrase should be considered as much "old stock" as the English or French. Back then, this was a group still feeling marginalized and dreaming of a day when Canada would make young black boys and girls feel confident enough to believe that they can grow up to become members of the highest echelons of their society.

I, too, had bought the hype that we had entered a moment of real change. But, alas, nothing has really changed in this regard. My grandchildren will have to wait to find someone in the corridors of real power that look like them, that they can hope to emulate, that can signal to them black lives matter. And people in the old guard like me can only hang our heads in shame and even defeat and hope that some day soon things will be different, that even in a multicultural Canada there is recognition and fraternity for blacks in Canada. 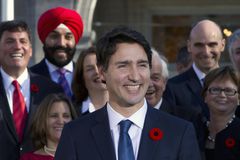