This federal government has a penchant for history, driven by a passion for dates and commemorations, giving us plenty to celebrate for the next several years. As a history buff, I can relate. My favourite calendars are the ones that describe This Day in History. My pop quizzes are riddled with Significant Dates in Politics.

Still, it's a curious obsession for a government to equate historical commemoration with the celebration of citizenship. It speaks to the determined efforts of the Conservatives to push back on the post-1960s definition of Canadian citizenship as a modern and multicultural entity to one anchored in symbols of the past. And it refocuses the emphasis from broader social history to one driven by military deeds, political leaders and historical dates.

These are worthy markers to reflect on. And this shift may lift some of the cumbersome baggage of multiculturalism for those of us who don't identify as hyphenated Canadians. But how about we celebrate some dates that have less to do with the British Crown or Great Men, and more with who we are as Canadians?

Let's start with 2013. This year marks the 100th anniversary of an important milestone: In 1913, the number of immigrants to Canada peaked at 400,000. It was a high-water mark until the onset on fighting in Europe brought an end to the biggest boom in Canadian immigration, before or since. For millions of Canadians, this is the era that started their family experience in Canada.

One of those families is my own. My paternal grandfather arrived at Pier 2 in Halifax in 1913 as a young boy from Italy, en route to Montreal. For him, as for the vast majority who travelled across the oceans before the First World War, it would be a one-way ticket with no looking back. In many ways, his experience was similar to that of my children's other first ancestor, who settled in Montreal in the 1680s with no thought of ever going home to his native France.

This story is a variation on a theme that so many Canadians share. Although my grandfather kept his traditions through language, faith and, of course, food, he built a life as a Canadian, making sure his children adopted the mores and values of the country they were born into. He worked his whole life for Canadian Pacific Railway, took in the less fortunate during the Great Depression, kept his head down and his Canadian loyalty strong during the war years. He was proud of his heritage but had no yearning for the old country, and waved no national flags. He refused to reveal any partisan political preferences (the secret ballot was his most treasured right), something I find a good rule of thumb as a political scientist.

In between this government's fixation on monarchical and military legacies, and past celebrations of cultural differences, lies an important gap of recognizing Canadians for who they are: the product of a distinct life experience on the ground, one that shifts and moves based on region, language and context but is rooted in similar family histories, legacies and aspirations.

So, this year, my extended family is marking an Important Date in Canadian History with our own 100-year milestone. With the tight budget situation on Parliament Hill, we aren't planning to ask Heritage Canada for a contribution. Still, the Conservative government might want to consider that celebrating citizenship also means a remembrance of Canadians' own diverse historical inheritance, which contributes to defining who we are and who we aspire to be.

The original print column and earlier online versions incorrectly referred to an immigrant arriving at Pier 21 in Halifax in 1913. Pier 21 was opened in 1924. The Ocean Terminal, also known as Pier 2, was the previous entry-point for immigrants at Halifax. 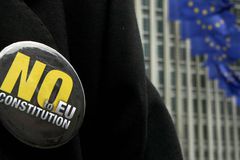 Opinion
Canada’s looking for terrorists in all the wrong places
February 9, 2013