Right before their eyes, on their very own soil, Canadians who understand the ways of the world will watch their country's importance shrink.

This year, Canada will play host to a Group of Eight summit followed by a Group of 20 summit that it will co-host with South Korea. In the fall, another G20 summit will take place in Korea, organized and led only by South Korea.

The confluence of the two summits in this country will be trumpeted by the Harper government as an example of Canada's relevance, whereas the more accurate story line suggests the reverse.

For a long time, the G8 (the G7 before Russia joined) suited Canada perfectly. It got a seat at the table when Gerald Ford was U.S. president because the Europeans overplayed their hand, demanding a seat for Italy. Mr. Ford said yes, provided that Canada entered the club to balance the new European country.

Canada became a member of a group that, by population or economic weight, it should not have been allowed to join. But now the G8 is finished. From one of eight, Canada will henceforth be one of 20.

The annual Davos conference that will open shortly has already announced that this year's session of G8 representatives will be the last. The Canadian G8 meeting might also be the last, but even if the organization lingers, its utility will have shrunk, because the main action has moved to the G20. Indeed, at the last G20 summit in Pittsburgh, the communiqué described the group as "the premier forum for our international economic co-operation."

Three summits in one year is confusing (and likely unnecessary), to say the least. For that reason, among others, the Americans recently demanded a meeting of summit representatives, to be held shortly in Mexico, to figure out what is going on. They have a point.

South Korea and Canada fought privately over the holding of these three meetings, with each wanting a G20 only on its soil. Moreover, the Koreans wanted the G8 held after the G20, a symbolic reflection of the G8 becoming a sideshow, whereas Canada insisted that it be held first. The compromise is three summits: G8 first, G20 in Canada co-hosted with Korea next, G20 in Korea.

Procedure aside, the morphing of the G8 into a G20 was a Canadian idea back when Paul Martin was finance minister. The question now for the federal government is what relevance Canada might have in the larger group, because axiomatically the country will have much less.

Maybe countries won't want a secretariat for this new organization, but it would be worth it for Canada to sound out the others and offer to place a permanent secretariat, and to pay for some of the costs, in an international city such as, say, Montreal.

Canada could argue that it is not a major power such as the United States or China, and not a European country, there already being too many international institutions located there. Canada does know how to organize events, is relatively innocuous yet more or less efficient, and once had a reputation for being constructive, even innovative, in international affairs.

Or Canada could propose a kind of secretariat in cyberspace, with headquarters moving around, and membership at the top of the secretariat involving the U.S., China and the hosts of the previous and next year's summit, plus the host of this year's.

If Canada were really innovative, it would understand that the major international issue remains climate change. The Copenhagen disappointment showed that a smaller group of countries is needed to work on something better, and the G20, or a subset of G20 countries, would be a sensible group.

Of course, this idea would never be advanced by the Harper government, which dislikes the climate-change file and wishes it would disappear. Instead, news reports this week suggest that Mr. Harper wants the G8 meeting to revolve around nuclear non-proliferation, a worthy subject but more a matter of U.S.-Russian relations. The subject really smacks of an attempt to divert debate away from climate change.

In any event, the two summits will show graphically Canada's fading importance, against which there is no sense railing. But, faced with that fact, the government should work harder at least to be innovative. 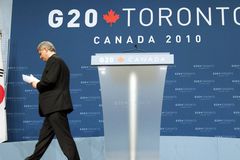 Opinion
Bloopers, hasty judgments and the year that was
January 1, 2010

Opinion
A surfeit of rah-rah, a dearth of serious debate
December 29, 2009