While Calgary just pulled off a "hell or high water" Stampede against incredible odds, Toronto is drying out after a storm that saw more rain fall in two hours than the city usually sees in the entire month of July.

This summer's deluge of extreme weather seems to have pushed Canadians over an important threshold: climate change is becoming widely accepted as part of the explanation for what we're seeing outside.

A few years ago, journalists seldom asked whether there was a connection to climate change when catastrophic weather hit. But in the days after Alberta's flood, the scientists who had given clear warnings of the risks posed by climate change found their phones ringing off the hook. Over and over, we've heard experts call this summer's pattern of extreme events "the new normal."

In other words, this is what climate change looks like. It means cities at a standstill, the hassle of dealing with insurance claims, pulling waterlogged mementos out of flooded basements – and in worst-case scenarios like we saw in High River, Alta., even the tragic loss of life.

Scientists usually hesitate to attribute any particular event to climate change, because it's just one factor among many shaping the weather we experience.

That's true and it's absolutely fair – but the fingerprints of climate change are becoming easier to see all the time. The best analogy I've heard is that greenhouse gases put the weather on steroids.

You can't say that steroids caused baseball legend Barry Bonds to hit a particular home run, but they definitely increased his odds. The same is true of the extreme downpours in Alberta and Toronto: a warmer atmosphere holds more moisture, so more rain can fall in any given storm.

In a new report on the world's weather, the World Meteorological Organization found that floods were the most "frequently experienced" extreme weather event of the past decade. The organization also found that 2001 to 2010 "was the warmest decade on record since modern meteorological records began around the year 1850." In sobering news for Canadians, our country's temperature increased by nearly three times the global average.

A lot of the debate in the aftermath of the Alberta floods has been about adapting to the new reality – how much should municipalities be spending on disaster preparedness? Are the areas where it's simply not safe to be building anymore? Does our approach to flood insurance need to change?

Good questions all, but along with figuring out how best to withstand floods, we need to talk about how to prevent even more of them happening in the future.

Most of the greenhouse gas pollution we emit endures for decades, with its full effects revealed only after a significant time lag. So the impacts we're seeing today are akin to the first few smokers' coughs from a 45-year-old who still has a two-pack-a-day habit.

Scientists say that we need to adapt to climate change, urgently. But they'll also tell you that the potential consequences of global warming are so grim that we can't count on safely adapting to all of them. We also need to cut our greenhouse gas pollution, mainly by burning fewer fossil fuels.

For an illustration of what it looks like when you put the puzzle pieces together, it's worth reviewing the landmark climate speech U.S. President Barack Obama delivered last month.

He started by invoking catastrophes like hurricane Sandy, linked them to climate change, talked about its massive costs and then pledged to take action to cut U.S. emissions.

If you accept that line of reasoning, then it follows that you'll want to ask tough questions about any proposal to expand fossil fuel infrastructure. That means Mr. Obama's new test for the Keystone XL pipeline proposal – that "net effects of the pipeline's impact on our climate will be absolutely critical to determining whether this project is allowed to go forward" – is entirely consistent with the rest of his argument.

He once called approving the Keystone XL proposal a "no brainer." And if climate change didn't exist – if the only considerations were construction jobs and Canada's status as a good neighbour – maybe it would be.

But Mr. Obama has made it clear that climate change matters to him. In the process, he essentially rendered Canada's lobbying campaign for Keystone – which has had little to say about greenhouse gases – obsolete. He also highlighted the sharp contrast between his view of climate change and that of the Canadian government.

Take the centrepiece of the Obama speech, a pledge to curb emissions from U.S. power plants. Coal accounts for about one-quarter of U.S. emissions, and as Obama noted, "right now, there are no federal limits to the amount of carbon pollution that those plants can pump into our air. None. Zero. …That's not right, that's not safe, and it needs to stop."

We can't say yet whether the regulations the U.S. Environmental Protection Agency will produce in response will be stringent. And no one is naive enough to believe that political speeches guarantee action.

But the oil and gas sector accounts for nearly a quarter of Canada's emissions, and right now there are no federal limits on its greenhouse gas pollution. None. Zero. And as of July 1, the federal government has missed another deadline to publish those rules.

In the U.S., it appears that extreme weather has put tackling climate change back on the agenda. Clearly, Canada has some adaptation to do in response to "the new normal" – not just on the ground, but in the political realm as well.

Clare Demerse is the director of federal policy at the Pembina Institute, a national clean energy think tank. 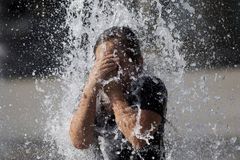 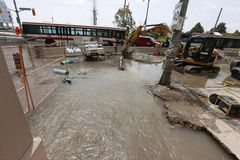 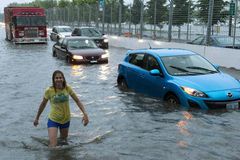