When I travel to any corner of Canada, complete strangers from every walk of life come up to me on street corners, in restaurants, in airports, to take a moment to talk to me. Sometimes, they thank me for my service during my long career in public life.

There is one sentence that I hear over and over again: "Mr. Chrétien, thank you for keeping us out of the war in Iraq." It is gratifying to hear, because that decision, more than 10 years ago, was not easy. The country was divided. Many columnists, pundits and editorialists were in favour of participating. Some within my own party disagreed with me, the business community opposed me, and no one was a louder critic than Stephen Harper, then leader of the Official Opposition. He even went on U.S. television and wrote an article in The Wall Street Journal denouncing the Canadian government's policy.

Today, there is almost universal recognition that we made the right decision. And so, in recent weeks, many people have asked me what I would do about the current situation in Iraq and Syria. Do I agree with Mr. Harper's position or Mr. Trudeau's? What should Canada do?

Here is my answer. ‎

There is no more serious decision for an elected official than sending men and women into conflict. The consequences, at home and abroad, are enormous. A wrong decision, such as the invasion of Iraq in 2003, can have disastrous results that reverberate for years. The current rise of the Islamic State is in large part a result of that war.

I know what it is like to send Canadians into combat. The government I led participated in multilateral combat missions in both Kosovo and Afghanistan because we determined that it was the best contribution Canada could make in those very difficult circumstances. ‎So I am not always opposed to sending Canadians into combat. But these are decisions that must be made with utmost seriousness and consideration. In general, it should also be done with a clear mandate and under the umbrella of the United Nations or the North Atlantic Treaty Organization, which is clearly not the case here.

We have an obligation to proceed with the utmost caution, and to weigh all the potential consequences before joining a combat mission.

For example, all the war in Iraq did was to make the region and the world a much more dangerous place. The legacy of colonialism in the Middle East had not been forgotten and was only exacerbated by the Western military intervention in Iraq in 2003, with the consequences we face today. Unfortunately, Mr. Harper did not understand that history in 2003, and he does not understand it today.

The current situation is in some ways very different from 2003. The Islamic State's atrocities must be stopped. But Western countries must be cognizant of the region's history in deciding how to act.

There are two components to the crisis – one military and one humanitarian. Both must be addressed.

The Iraqi government has asked for U.S. assistance and President Barack Obama has responded with air strikes. But given the history of the region and the sensitivities to Western military interventions, I believe that any U.S.-led military coalition should be composed mainly of Arab countries, with minimal participation by other Western countries.

I have enormous‎ admiration for the men and women of the Canadian armed forces. But the reality is that the military contribution Mr. Harper's government has authorized will be very marginal.

What it really does is to add Canada to a list of contributing Western countries. The history of the Middle East tells us that this list should be very short, not long.

‎No one underestimates the Islamic State. But the issues are the best ways to combat it and the best contributions Canada can make. ‎If the region sees military intervention as just another knee-jerk Western show of force, we all know what the long-term consequences will be.

This is why I believe the best ‎contribution Canada can make is by engaging in massive, not token, humanitarian assistance. It is why in answer to the questions asked of me, I support Mr. Trudeau's position.

The Islamic State has created a massive humanitarian crisis. Hundreds of thousands of people have been displaced. Neighbouring countries are dealing with floods of refugees. The World Food Program is almost out of funds and winter is approaching.

The Prime Minister may believe that not participating in the combat mission means Canada will be sitting on the sidelines. He is absolutely wrong – Canada should be on the front line, addressing the humanitarian crisis.

‎For well over 50 years, it has been the Canadian way to open our hearts, our doors and our wallets to victims of great upheavals – Hungarians in the 1950s, Ugandans in the 1970s, Vietnamese boat people in the 1980s, refugees from the former Yugoslavia in the 1990s. And I am always thrilled by the great contribution they make after arriving.

Here are two concrete initiatives I would recommend for Mr. Harper to put Canada on the front lines of the humanitarian crisis while a U.S.-led, primarily Arab coalition focuses on the military crisis.

First, Canada should offer to immediately take 50,000 refugees fleeing the Islamic State. I hope the government will move on this quickly.

Second, the government should immediately allocate $100-million‎ for the World Food Program, to help feed refugees facing a harsh winter.

I understand that faced with the barbarism of the Islamic State, many Canadians want their leaders to respond swiftly. It is a natural reaction and is praiseworthy. It's exactly what I am proposing as a natural extension of Mr. Trudeau's decision and Canada's long-standing tradition.

Opinion
For Harper, a textbook moment for a snap election
October 10, 2014 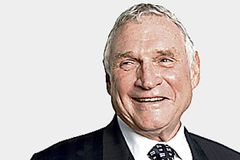