When it comes to health care, Canada lives beside the wrong country.

U.S. health care has been a bogeyman in Canada for decades, used by unreconstructed defenders of the Canadian health-care system to scare off any fundamental debate about medicare.

No Canadian political actor – right, left or centre on the spectrum – has ever urged that Canada adopt the U.S. system. Why would Canada do so? The U.S. spends roughly half again as much of its national wealth on health care as Canada – almost 18 per cent of GNP compared to 11.7 per cent for Canada – but does not have better aggregate health-care outcomes.

And yet, for those who cannot bear criticism of Canada's national icon, scaring people about the U.S. system has proven a handy rhetorical trick. Just you wait, they say. The proponents of U.S.-style health care in Canada lurk under every table and around every corner just waiting to pounce.

If Canadians change this or that, or if we even consider delivering health care differently, we would be on the slippery slope toward a "two-tier" U.S. system of medicine where, as former prime minister Jean Chrétien once quipped, "they check your wallet before your pulse."

This incessant Canada-U.S. comparison contributes to freezing Canadian debate. If we lived beside another country, or countries, with largely public health-care systems, we could compare our system with theirs. If we did, we would find the Canadian system to be sorely inadequate – at least that is what all international comparative studies show.

The biggest knock against U.S. health care, apart from its huge national cost, is its fundamental unfairness. Roughly 50 million people are without health-insurance, and millions of others are underinsured. During and after the recession, a distressing number of people lost their private health insurance as their jobs disappeared or new collective bargaining agreements stripped away health-care protections.

U.S. President Barack Obama proposed to end this situation with a massive reform act that contained, among many other changes, a mandate that required individuals without insurance to become insured, and offered financial help to achieve that objective.

This idea of an individual mandate emerged more than a decade ago in conservative think tanks. It was later picked up by Republican politicians, including Mitt Romney, who made it a centrepiece of his health-care reforms while governor of Massachusetts.

Nationally, what to do about health care split the Democratic Party. One group, much the smallest, kept the torch aflame for single-payer coverage, a variation of the Canadian system. The majority, including many who in theory favoured single-payer, concluded that Americans were not ready for this kind of "socialism." So they looked to market-based solutions backed by government subsidies, and came around to the individual mandate.

This Democratic conversion ought to have produced a happy marriage with Republicans, except that the radicalized Republican Party of recent years had abandoned its baby. Republicans now decry the individual mandate as an infringement on U.S. liberties, and oppose it with a rhetorical vehemence that borders on the irrational.

Very rich Americans are pouring millions into campaigns to oppose "Obamacare," and the Republicans have pledged to make their opposition to a variation of that which they once favoured a centrepiece of their fall campaign.

Now that the U.S. Supreme Court has found the President's entire package constitutional in a 5-4 vote, at least the court has removed itself from the campaign. But the issue of what to do about the expensive and potholed U.S. system – which has outstanding care for the properly insured, it must be said – will remain at the heart of U.S. politics.

If eventually the President's changes take hold, then the vast majority of Americans will be covered, albeit in different ways than in Canada. And one of the great injustices in U.S. society will have been rectified. Even so, knowing how useful knocking the U.S. system has been in Canada, do not expect Canadians to lower their exaggerated pride in their own system.

A conservative decision in favour of U.S. health care
April 30, 2018 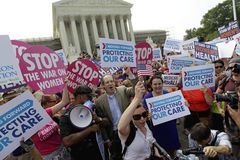 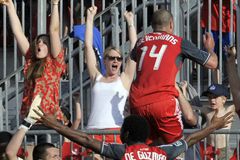