Canada's rank racism toward aboriginal peoples was institutionalized within the fundamentals of European philosophy and culture, says maverick thinker John Ralston Saul. Europeans insisted their principles were universal. "Of course they were universal. After all, they said they were."

With their technological and cultural sophistication came a conviction of racial superiority. They were so superior, the writer adds, that they proceeded to massacre one another, as the aboriginals quizzically looked on, in one world war and then a second. A hundred million died in less than half a century.

More wars followed, along with more racist attitudes toward the destined losers. In more recent times, a more sympathetic attitude has been adopted toward indigenous peoples, but it still smacks of soft racism, according to Mr. Saul.

What's missing, he robustly contends in his new book, The Comeback, is the realization that aboriginal peoples have been making a remarkable recovery and are now on the verge of taking a prominent place in this country.

What's happening today is comparable to the Quiet Revolution in 1960s Quebec, he says. Our indigenous peoples are about to impose themselves the way Quebec nationalists did then. Few understand this because the focus has disproportionately been on the suffering and the failures – the rapes, the poverty, the residential schools, the Attawapiskats.

Mr. Saul is on a crusade to rebuild the aboriginal narrative. His take may be Pollyannaish – he never has a critical word to say about the aboriginal side of the story – but given all the gloom we hear, it's important to hear the positive.

He began his campaign several years ago with his book A Fair Country, in which he made the case that we owe many of our best qualities as Canadians to our indigenous peoples' heritage.

Now, with the Quebec comparison, he's taking it a step further. There's a new aboriginal elite. We have Inuit and Cree corporations. Supreme Court victories are giving aboriginals more control over the commodity-rich lands of the North. Climate change is playing to their agenda. The aboriginal population is rapidly increasing, as is aboriginal youth enrolment in universities and colleges. "They are smart, intellectually lean and rightfully angry young people," he says – their clout was felt with Idle No More and will soon register more tellingly.

Our Western model put few brakes on commercial development. Governments have too often run the Canadian North, where two-thirds of our resource wealth lies, "like slum landlords." With the native peoples' legal victories, their philosophy, which sees the human as integral, as opposed to a dominant part of the whole, will take hold.

Aboriginal advances have hardly been helped, the author pointedly notes, by a Conservative government that "serves as a loyal servant of commodities corporations." Their war against environmental oversight through the use of mammoth omnibus bills, which serve to camouflage controversial legislation under an avalanche of other measures, are a direct negation of our democratic system, and a "direct and dangerous attack on aboriginal rights."

Mr. Saul will be criticized for one-sidedness in his analysis. But he has written a powerful treatise that provides a fresh way to look at Canadian history. It's important that native peoples have a writer of his heft in their corner.

Former prime minister Paul Martin is also devoting much of his energy to aboriginal causes and is doing estimable work. He, too, sees the makings of a renaissance.

Power is coming to aboriginal peoples and they are prepared to use it. As The Comeback makes clear, there is no reason that they should stand by and continue to allow the riches to flow south.

Opinion
Canada’s cities must listen to their aboriginal voices
November 19, 2014 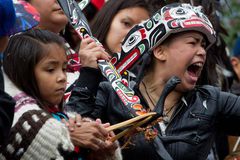