Adrian Shubert is a professor of history at York University, and Barbara Molas is a doctoral student in the department of history.

A record 82 per cent of eligible voters cast a ballot in Thursday's election in the Spanish region of Catalonia. The results reveal a society that remains deeply, and almost evenly, divided after the recent series of dramatic events it has experienced.

It certainly was an unusual election, called by the government of Spanish Prime Minister Mariano Rajoy on Oct. 27 when he invoked the never-before-used Article 155 of the constitution to depose the government of Catalonia after its illegal unilateral declaration of independence. Voting took place with former Catalan president Carles Puigdemont and three of his former ministers in self-imposed exile in Brussels and former vice-president Oriol Junqueras and two other Catalan ministers in jail.

After a tumultuous October that included the use of the Spanish police to prevent an illegal referendum, numerous massive demonstrations, two declarations of independence within 11 days, the flight of almost 3,000 corporate head offices, and Mr. Rajoy's unprecedented action, independence was inevitably the axis on which the campaign turned.

There are seven major parties, with three in support of independence – Mr. Puigdemont's Together for Catalonia, Mr. Junqueras's Catalan Republican Left and the ultra-left CUP – and three forming the so-called constitutionalist bloc that opposes it: the new Citizens party, the Socialists and Mr. Rajoy's Popular Party. The young leftist Catalonia in Common party supports neither independence nor the imposition of Article 155.

With the former Catalan government dismantled and several of its ministers jailed or exiled, the campaign presented several unprecedented scenarios, including Mr. Puigdemont addressing Catalans from Brussels via videolink and Mr. Junqueras sending an audio recording from a Spanish prison. But such difficulties did not prevent their pro-independence parties from retaining a majority in the Catalan parliament. Mr. Puigdemont, whose party came second, won a powerful personal vindication.

In fundamental ways, these results differ little from the previous election in 2015. Again, separatists won a majority of the seats but not of the votes. (Small towns and rural areas where separatists are strongest are overrepresented in parliament.) Once again, the ultra-leftist CUP will be decisive in the possible emergence of a secessionist government. This time, however, as many as eight pro-independence deputies either remain in jail or are facing arrest warrants. Specifically, Mr. Puigdemont's return to Spain could lead to his incarceration. Nonetheless, Catalonia's clear support for his return will surely play a key role in him gaining international legitimacy.

There are also several differences that make Thursday's election a historical landmark for both Catalonia and Spain. Above all, the use of Article 155 has triggered a general distrust of the Spanish government among Catalans. On the one hand, pro-independence voters had been openly afraid of Spain manipulating the results or ignoring them if they proved inconvenient. On the other hand, many anti-secessionist voters were uncomfortable with the Spanish government's direct intervention and the resulting reinforcement of centralism against regional autonomy.

There has also been a major change in the political landscape. Among the parties, the big winner was Citizens, which received the most votes and won the most seats. There is no chance its impressive leader, Inés Arrimadas, will form a government, but her 10-year-old party is now the voice of anti-separatism. The big loser was Mr. Rajoy, whose Popular Party received only 4 per cent of the vote and is on the verge of disappearing entirely in Catalonia. This will likely have consequences across Spain.

Regardless of ideological divergences, Catalonia had rarely seen such sweeping public involvement. Debating politics has become a daily routine, with Catalans openly sharing their beliefs and energetically defending their positions. Never have we seen so many people not only caring about their region's future but also, and most importantly, making their voice heard in determining that future.

A new government still needs to be formed. It will most likely be a separatist coalition, but have the parties that comprise it learned anything from the disastrous attempt to declare independence unilaterally? Outside parliament, the voices in the streets – all of them – are still fighting to be heard. It also remains to be seen whether politicians, both Spanish and Catalan, will care as much as the people who voted for them do. At the moment, it seems Catalonia is back where it started. 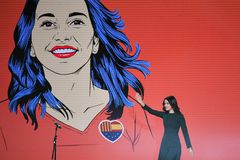