When he retires from his post, the Governor-General of Canada will have his bank accounts subjected to heightened scrutiny. So will his parents, his spouse and his children, for the next 20 years. So, too, will the Chief Justice of Canada, all Supreme Court and appellate court judges, ambassadors, counsellors, deputy ministers, generals, past and present, and all their family members. They should expect calls from their bankers asking questions about the sources of deposits and other transactions. And if one of their children happens to have a joint account with a third party, all that would have to be explained to the bankers who are required by law to exercise such vigilance.

Why is this happening? Because all of these people have been designated as "politically exposed domestic persons" (PEDP) under the Proceeds of Crime (Money Laundering) and Terrorist Financing Act. Why should they be subjected to this intrusive procedure for 20 years after they leave office? No idea. And why should their children also be under this regime for 20 years? Equally puzzling.

In fact, I can think of an answer. It's because all this was put in place with no one having any idea it was happening. This is hardly surprising given that it was buried in the massive omnibus budget bill of 2014 known as Bill C-31. Equally troubling, most people wouldn't care anyway.

We have witnessed such an unprecedented erosion of our privacy rights in this country in the name of the war on terror, the war on crime and other fear-mongering political initiatives, that this Orwellian scheme managed to sneak by with little or no public attention, as far as I can tell.

The only reason it came to my attention is that starting some three years ago, two different banks asked two of my children these types of questions, threatening to close their bank accounts if they did not respond. Under my advice, one of them did not respond within the required time (about a week), as I wanted to look into it more closely; the bank did close her account and only reopened it after she answered the questions (needless to say, she was not all that impressed with my advice).

At that time, there was no such thing as PEDP. Both banks took the position that they had to question my children because I was a politically exposed foreign person (PEFP). They were wrong. I was not, and had never been "a judge in a foreign country" or anything else falling under the definition of a PEFP. It was while in the process of wanting to clear that up that I came across the newly enacted provisions dealing with "politically exposed domestic persons" and realized that the future had caught up with me. I am now covered by the law, and so will my children be when the regulations get cabinet approval.

Compared with the plight of Syrian refugees, this is not catastrophic. It's just another one of the ridiculous, expensive, useless procedures that slowly erode rights while giving the false impression of enhancing security. It feeds into the perception that people who have nothing to hide should not be concerned about such things (such as Bill C-51, the anti-terrorism law passed in May).

We don't wear clothes simply because we have something to hide; or lower the blinds in our bedrooms, or close our office doors while on the phone, or seal our letters, or use passwords on our computers. We hide certain things not because they are illegal, or bad, but because they are private.

I have no idea why we should want to keep an eye on the bank books of Supreme Court judges for 20 years after they retire. Maybe it's just a price to pay for the privilege of holding office. But their children, and their children's spouses, didn't sign up for any of that. They should be left alone by their bankers, who I am sure would be relieved to be awakened from this useless bureaucratic nightmare.

Meanwhile, it is difficult to figure out how exactly this grand scheme is to be implemented. If it is taken seriously, it will surely require lots of resources to monitor thousands of domestic "politically exposed persons" for decades, and the cost will likely be passed on to all of us.

But we've long been told that our security has no price. Especially when it's worth nothing, as is the case here. 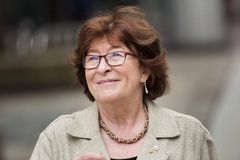