Recent individual cases between China and Canada have led some people to assert that the ship of Canada-China relations has struck a rock. In reality, it is hard to avoid bumps and grumps between countries. In this context, we should not miss the forest for the trees.

Since becoming China's ambassador in Ottawa three months ago, I have established contact and exchanged in-depth views with Canadians from all walks of life. I am impressed by Canada's advanced economy, multicultural society, beautiful environment, as well as people's kindness, passion and wisdom. The Canadian government has attached importance to its relations with China, which also adds to my appreciation.

In my view, China and Canada – as Asia-Pacific nations – have great potential and bright prospects for beneficial mutual co-operation. We should focus on practical co-operation and manage our differences broadly to keep the sustainable development of China-Canada relations on the right track.

Firstly, China and Canada are closer than ever before. Canada was one of the first Western countries to establish diplomatic ties with China and the Chinese people always have favourable opinions toward Canada. In 2013, the amount of two-way students reached 100,000, a fivefold increase from 10 years ago – and 1.2 million people travelled between our two countries, making China the largest source of overseas students and the fastest-growing tourism market to Canada. More than 3,000 people travel across the Pacific Ocean every day, much more than the total number of travellers between China and Canada in an entire year in the early 1970s. Moreover, local exchanges between our two countries have increased significantly, and the number of paired sister cities and provinces was 55 by the end of July.

The leaders of our two countries have reached broad consensus on developing bilateral relations. Prime Minister Stephen Harper has visited China twice and Governor-General David Johnston also paid a visit to China in 2013. During the visits, the two sides agreed that the development of China-Canada relations serves the interests of both countries. The ministers of various Canadian government departments such as immigration, health, agriculture, international trade and foreign affairs visited China this year. Some Canadian premiers will jointly visit China in October. The Chinese side has also invited Mr. Harper to visit China again in November, when he will attend the 2014 APEC meeting in Beijing. All these visits reflect the broad base of co-operation between China and Canada.

Secondly, Sino-Canadian co-operation is increasingly benefiting our two peoples. China is Canada's second-largest trade partner and export market. In 2013, the two-way trade volume reached nearly $55-billion (U.S.), and China's investment in Canada increased to almost $50-billion. Chinese markets and investment have either directly or indirectly created hundreds of thousands of job opportunities for Canada. Similarly, the investment from Canadian companies such as Bombardier Inc., Power Corporation and Manulife Financial Corporation has been upgrading several Chinese economic sectors, including transportation, environmental protection, mining and finance. High-quality food products from Canada, such as lobsters, blueberries and cherries have entered the Chinese market and gained widespread popularity among consumers.

In May, International Trade Minister Ed Fast announced that Canada will open four new trade offices in China, bringing the number to 10. The negotiations of bilateral currency swap arrangements and establishment of the offshore trading hub for China's currency in Canada have made progress. Furthermore, our two countries have conducted exchanges and co-operation in the fields of science and technology, health, military etc., and achieved fruitful results. We also share the same or similar stands over multilateral issues, such as United Nation affairs and climate change.

Thirdly, looking into an even broader prospects for our co-operation, there are more opportunities than challenges. Admittedly, some differences do exist between China and Canada due to different historical and cultural backgrounds, social systems and stages of development. However, the common interests between the two countries far outweigh the differences. More than 40 years of bilateral exchanges have proven that we can make the pie of common interests bigger if we are good at seeking common ground. As long as we can properly handle differences, a win-win situation will be eventually achieved on the basis of mutual respect.

Right now, the Chinese people are pursuing the Chinese Dream. It is projected that in the coming five years, China's imports will reach $10-trillion, its outbound investment will reach $500-billion, and the number of its outbound tourists may well exceed 500 million. In line with implementing this innovation-driven strategy, China is dedicated to develop industries where Canada boasts strong innovation, such as clean energy, environmental protection, information technology, high-end manufacturing and financial services. Canada's innovation advantage combined with China's well-established manufacturing industry, abundant technical workers and huge market will bring great possibilities for co-operation and yield sound economic and social benefits. Surely we can tell that it is a big delicious cake. In pursuit of common interests for our two peoples, there are no difficulties that cannot be overcome.

Fourthly, we should face up to individual cases and properly handle our differences, accumulating positive energy for the development of bilateral relations. Both China and Canada are nations under the rule of law. It is inevitable that cases of illegal activities occasionally surface with increasing exchanges between the two peoples. I propose that we should not impose limits on personnel exchanges and handle those cases in accordance with the law so that we can remove obstacles to further promote bilateral relations. Last, but not the least, we should prevent those cases from ignoring or kidnapping our bilateral relations.

I truly appreciate the remarks by a Canadian friend: "In the era of globalization, the broad Pacific Ocean has turned out to be a small river, making China and Canada close neighbours." Together, let us join hands and work closely in the same direction to focus on co-operation. By doing so, we can build a better future for China-Canada relations. 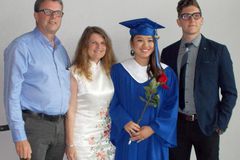