They are half a world apart, separated by a gulf of language and history and democracy, but the two most successful countries in the world are coming to resemble each other in important ways. The decisions they make are going to have a profound impact on our future, and the world will become a more stable and prosperous place if they can avoid each other's mistakes.

Together, China and Germany account for more than a fifth of all global exports, having outstripped even the United States. The rest of us pay $2-trillion (China) and $1.6-trillion (Germany) a year for their products.

Yet they both share similar challenges. Both countries are dependent on large-scale imports of natural resources and energy. Both have relied, in recent years, on restrictive fiscal and monetary policies that have angered their recession-battered trading partners. Both are islands of growth amid seas of simmering recession in their export markets – and both have been blamed for igniting or sustaining these crises.

Both, too, have fast-aging populations, small family sizes, shrinking work forces and difficulty finding and keeping the workers they need for their booming industries.

Neither country, significantly, is a big player in international military adventures – which may be one of the root causes of their trade success. As Jan Techau of the Carnegie Europe centre wrote recently, both China and Germany have, "for at least a generation, focused on internal affairs and economic development, at the expense of foreign policy. Both are fearful of losing the political stability and wealth that these efforts have created."

And both are having a tense moment. Growth and exports have recently slowed or stalled in both Germany and China, in large part because of crises in their market countries. Both have populations frustrated with living standards that haven't kept up with growth. They ought to start learning from one another.

What Germany can learn from China: keeping clients out of ruin. Both Germany and China became leading exporters because they kept domestic wages and social costs low enough to be able to compete aggressively in exports. This led to crises – cash pooled up at home and debt piled up in their clients (for China, the United States; for Germany, the European periphery).

China has managed to solve this problem in a big way. Over the past six years, it has gone from having a current-account surplus (that is, cash piling up from export earnings) of 10 per cent of its economy in 2007 to just 2.6 per cent last year. It did this by allowing its currency, the yuan, to rise in value, by allowing domestic wages and consumer spending to rise quite dramatically, and by investing a larger chunk of its $3.4-billion cash surplus in big projects that boosted the domestic economy.

Germany has been slower to respond. While it has allowed some wage rises, its surplus has fallen just from 7.5 per cent to 6.4 per cent – a big reason why the euro crisis continues. Fear of an expansionary policy and unhealthy embrace of austerity continues to grip its politics, but domestic growth would be a big part of a European solution.

What China can learn from Germany: importing people. China's working-age population is shrinking by three million to four million people a year. One of the country's manufacturing associations reported last month that 80 per cent of its corporate members are having trouble recruiting workers. Minimum wages have been raised dozens of times in an effort to keep workers – with limited success.

Germany, with its even older and faster-shrinking population, has learned to solve this problem by importing people. At the moment, this is mainly because millions are streaming in from Italy, Spain and other beleaguered EU client countries, easing the labour shortages.

But Germany has also experienced a seismic change in public attitudes during the past decade, as ordinary Germans and their leaders have come to recognize Slavic and Turkish immigrants and their offspring as authentic Germans. It is one country where anti-immigrant parties have failed to gain a toehold in national politics, and the new tolerance is palpable in its cities. Germany recognizes itself as a country of immigration.

China still has to learn how to import people: Some factories in the south use African workers, but they have a rough time: To put it mildly, ethnic minorities have trouble being accepted in China – even if they're Chinese.

Turkey is not having another Arab Spring, but something more democratic
Subscriber content
June 3, 2013 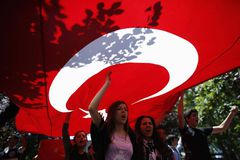 Opinion
Canada doesn’t negotiate with terrorists. Until it does
June 1, 2013