Chinese Foreign Minister Wang Yi's scolding of a Canadian reporter for daring to ask a question about human rights in China has made headlines around the world. The unexpected rant reflects China's attempt to export its own values, especially censorship, to the West.

Instead of a spontaneous display of anger, the performance was clearly staged. Chinese officials are asked about human rights everywhere they go, and so the question itself should not have been surprising. What was odd was that while the question was directed at Canadian Foreign Affairs Minister Stéphane Dion, the Chinese minister stepped in to respond.

Despite its loudly proclaimed principle of opposing interference in other countries' internal affairs, it seems China practises such interference, preventing a Canadian reporter from asking a Canadian official about Canada's policy on China. If this type of behaviour is accepted, it is tantamount to giving China the right to censor what is said and written about China around the world.

It is notable that Mr. Wang told the Canadian reporter, Amanda Connolly, that she has "no right to speak" on human rights in China. Only the Chinese people, Mr. Wang said, have such a right.

But, of course, Chinese who speak up on human rights end up in jail. But if Mr. Wang had his way, people outside of China wouldn't know that Chinese people don't enjoy freedom of expression, and such undiplomatic questions would never get asked.

It is understandable that Chinese people are proud of their economic achievements over the last few decades. But Mr. Wang is over the top when he asks, "Do you know that China has come from a poor and backward state and lifted more than 600 million people from poverty?"

Until Mr. Wang answers these questions, he has no right to boast about lifting people out of poverty.

China's new assertiveness was reflected in Mr. Wang's tirade as he asked the Canadian reporter a series of questions, which included, "Do you understand China? Have you been to China? Do you know that China is now the world's second biggest economy with $8,000 per capita?"

This display of arrogance is frightening. If that is the way China behaves when it is the world's second biggest economy, what is one to expect when it becomes number one?

Clearly, Mr. Wang – and the Communist party – is sensitive to questions about human rights. The media's response should be to keep peppering him with questions everywhere he travels about China's treatment of human-rights advocates, the Hong Kong booksellers, the imprisonment of the Canadian missionary Kevin Garratt and the South China Sea. Since these are the questions Mr. Wang doesn't like to hear, these are the questions that should be asked. Over and over again until they get a proper airing.

In the meantime, Mr. Wang's words and actions should be drawn to the attention of the International Olympic Committee. Beijing has been picked to host the 2022 Winter Games and, according to the Olympic Evaluation Commission, the Chinese government has provided "written assurances" of its commitment to press freedom, the right to demonstrate, labour rights and environmental protection in the context of the Games.

Before the 2008 Summer Games, China promised that the Games would further the cause of human rights in China. Instead, China cracked down on Chinese people who, according to Mr. Wang, "have the right to speak" on human rights.

Thus, Hu Jia, who co-signed an open letter, "One World, One Dream, and Universal Human Rights," was found guilty of "inciting subversion of state power" and sentenced to 31/2 years in prison; Yang Chunlin, who petitioned against illegal land seizures, was sentenced to five years; Teng Biao, who offered to defend Tibetan suspects arrested after the Lhasa riots just months before the Olympics opened, lost his licence to practise law.

With Mr. Wang's public attempt to stifle the Canadian press, how credible is China's latest pledge to protect human rights?

Opinion
Canada should not be ‘blinded’ over human rights differences with China
June 5, 2016 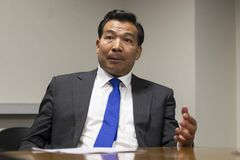 Opinion
When China feels superior, so do its envoys
June 6, 2016