Our Foreign Affairs Minister, Chrystia Freeland, will not be sitting down for borscht and blini in Russia any time soon. Maybe never.

She holds a rare ministerial distinction. She's banned from that land. She was blacklisted three years ago, along with 12 other Canadians, in retaliation for sanctions imposed in response to Russian aggression in Ukraine. No diplomatic overtures to end the ostracism are planned. Ottawa put the sanctions in place first, a Russian embassy official tells me, and they will have to be the first to lift them. No, it's not up to our side, a Freeland spokesman says. "It's a question for Moscow."

So the standoff stands. And news this week the Trudeau government is set to renew a military mission training Ukrainian troops to confront Russian-backed separatists will only further the Kremlin's angst about Ms. Freeland. When she was appointed Foreign Minister last month to replace Stéphane Dion, the Vladimir Putin state-run media said the move constituted "a catastrophe for Canada-Russian relations."

Globe editorial: In troubled times, Canada should not abandon Ukraine

The Russians are spooked because the feisty and super-bright former journalist is of Ukrainian descent. They suspect she'll take a harder line than Mr. Dion. Indeed, she might – and with good reason. Her Russian counterpart, Foreign Minister Sergey Lavrov, took to the podium last week, and in a show of remarkable imperiousness and conceit, announced the beginnings of a "post-West world order."

Kremlin conduct under Mr. Putin is getting more and more offensive and Canada, says Roland Paris, the former foreign-policy adviser to Justin Trudeau, is hardly immune. "The liberal democracies that are being subjected to Russia's disruption operations in their elections need to come together to resist them. There's no reason why we won't be subject to the same kind of disruption and subversion."

Added to the challenges for Ms. Freeland are the ways of the White House, where, under President Pandemonium, everything and its opposite is possible. For Ottawa, the old dynamic has been turned on its head. Traditionally, Canadian Liberal governments and sometimes Conservative ones have sought to temper relations and bridge differences between Washington and Moscow. Now, the role may be to stiffen spines in the White House. The fear is that the Trump administration will make an accommodation or grand bargain with the Kremlin wherein the West gets snookered and we are indeed at the dawn of the post-West world order.

Not unlike Mr. Putin, Mr. Trump is seen as an authoritarian who subverts the truth and is bent on trying to silence the free press. As Mr. Paris notes, he gives off so many conflicting signals that no one can really know what's up or down. To top off the tumult, U.S. intelligence agencies suspect the Russians colluded with the Trump team during the election campaign, meaning the U.S. President could be compromised in dealing with them.

Stephen Harper justifiably took a rock-hard stance against Mr. Putin, but shut down channels of communication in the process. The Trudeau government has reopened dialogue in a number of areas, most notably on Arctic issues. Ms. Freeland's prohibition doesn't mean she can't negotiate with the Russians. She spoke with Mr. Lavrov last week. Former prime minister Jean Chrétien has maintained a rapport with Mr. Putin and is available to assist Mr. Trudeau on Russian files. But we won't see doors opened there the way they were in Washington last week with the help of Brian Mulroney.

But it's so different now. In dealing with Moscow and Washington, precedent can be thrown to the dogs. The continuing banishment of our Foreign Minister from Russia is but a small symbol of how bizarre geopolitics has become. It's not something that bothers Ms. Freeland. Nor should it be. Given the ways of the Russian thug, it's more like a badge of honour. 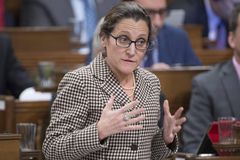