It's marvellous what you see when you walk through the city at night. Watchful cats in windows, secret parking lots, a store that seems to sell only hockey jerseys and hookahs. Another store simply called "Sweater Place." The paradoxical life goals of cyclists who smoke as they pedal through the snow.

The other things you notice from your vantage point as a foot soldier in the war between the pedestrian and the car is that the pedestrian is not winning. Drivers on phones cut you off, eyes focused on a mythical land that does not include actual people. There are few sidewalk benches where a traveller might stop to rest, eat or flirt, should flirting weather ever return.

I walked up one of Toronto's great boulevards to hear Jennifer Keesmaat, the city's progressive chief planner, talk about the benefits of walking. It was 15 below, and it was just me and the raccoons and the emergency workers and the sound of snow under my boots.

"We haven't done a very good job of planning our city for walking," said Ms. Keesmaat, and she might have been talking about any city on the continent. In her lecture, she asked why children don't walk to school more: Currently, only about 12 per cent of North American kids walk or cycle; the majority are driven. Just one generation ago, those figures were completely the opposite. Most kids walked (or lollygagged, more likely – but if they were late, it was their own fault).

This is a bizarre transition, considering the clear benefits that come from walking to school: Not just in terms of mental and physical health, and creating less pollution, but also in the immeasurable value to a child's sense of independence and freedom from the annoying world of adults. "What has happened to this adventure," Ms. Keesmaat asked, "this free, simple adventure?"

Simply, we have to rethink the way we share schools and sidewalks and roads. Like other Canadian cities, Toronto is bursting out of its stockings. The congestion will only get worse; Ms. Keesmaat's department has undertaken a major consultation on how people move, and how they would like to move, through the city's streets. One of those ways lies at the end of our legs. "We can transform the city through walking," she said.

The same night I listened to these heartening words, two pedestrians were killed by cars in Toronto, one of them an 18-year-old woman. If we are going to get serious about the most eco-friendly, brain-friendly method of travelling, then the streets need to be safer and friendlier, particularly outside the downtown core.

Better crosswalks, more benches, improved sidewalks: These are tiny changes with huge benefits, but they require an act of public and political will, and thinking that leaps past the next electoral cycle. I would also throw people who drive through crosswalks into jail, but then I'd be writing this column from prison, since I've inadvertently done it myself.

If we were rational creatures, we'd incorporate the mountain of evidence into public policy. Just look at two recent studies: One, from the University of Pittsburgh, found that regular brisk walking can help slow the progress of age-related memory loss. The other, from researchers at St. Michael's Hospital in Toronto, found a correlation between walkable neighbourhoods and the onset of diabetes. Not surprisingly, people who lived with shops and transit within a 10-minute walk were less likely to develop the disease.

However, rational behaviour is not our defining characteristic as a species, as Charles Montgomery points out in his book Happy City: Transforming Our Lives Through Urban Design. He interviews an academic who studies the effect of walking on mental health: "Walking works like a drug, and it starts working even after a few steps."

So why aren't we better at incorporating this cheap, legal high into our daily lives? As Mr. Montgomery writes, it's a complicated problem involving conflicting building and planning goals, work patterns and short-term thinking – but we, the half-hearted walkers, are also to blame, in our desire for speed and convenience. Sometimes, we might just have to move more slowly and carry less crap around.

Which is fine if you're walking along a pretty street with brightly lit windows and the moon above, as I was when I left the lecture. It's not a walk I would have wanted to make across eight lanes of traffic, with not a soul or a shop in sight.

Opinion
In Toronto, it’s time to harness the power of a regional transit network
October 31, 2013 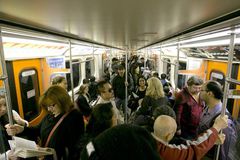