We are Blue Jays fans, and while we'll be cheering for Toronto to defeat Cleveland in the American League Championship Series, we shudder when we imagine the phrase "Blue Jays pummel Indians". There is no longer any place for indigenous mascots to represent sports teams. Not in the United States, and certainly not in Canada.

Using team names like "Indians", "Chiefs", "Braves", "Redskins" or "Eskimos" is offensive: They are race-based and they should be abandoned if not prohibited. Would we really be having such a conversation if a high school football team were called the "Northern Negroes" or if a professional sports franchise in Canada had the name "Jasper Jewboys"? Not likely.

Using indigenous peoples as team names is the worst form of cultural appropriation. It takes an entire people and reduces them to the basest of stereotypes. If you have any doubt, simply look at Cleveland's logo, Chief Wahoo. This is no tribute to indigenous peoples: it is a cartoonish amalgamation of stereotypes that demean the dignity of real people.

In a baseball game, the umpire calls out strikes loudly for all to hear. So too should fans of the game call out racism.

Indigenous team names threaten our personal security. Yelling, "kill the Indians!" on the street may be a precursor to a hate crime, but inside the Rogers Centre it is not only acceptable, but encouraged by some. Imagine how an indigenous person would experience being surrounded by people yelling various things, including phrases about "those goddamn Indians" or worse.

Now change that phrase to mention whatever group you belong to and say the same phrase, or change it to say your group is "stupid" or "cheating".

Why are indigenous persons expected to accept such indignities? Why do the rest of us not challenge the sports teams and the leagues for promoting such attitudes and egging racism on.

The Canadian Charter of Rights and Freedoms protects security of the person. The Supreme Court of Canada has said this includes both physical and psychological security. And various human rights codes are supposed to ensure that discrimination is not part of public spaces, like ballparks. This country's trends in laws and political policies apply to all who are located here, including teams that originate from other countries.

The City of Cleveland cannot be faulted for not knowing about Canada's Truth and Reconciliation Commission. And Blue Jays fans who are at their worst are a concern to all and require a strong response. But we need to realize it's not a game when fan intensity, alcohol and trash-talk collide with the dignity of peoples who have been marginalized in their own country.

There is a lot of attention being paid to calls for reconciliation in this country. Reconciliation begins with respect for one another and acknowledgement that indigenous peoples are people – not cartoon mascots with cute-sounding nicknames.

Schools and leagues around the country have shown courage in changing their team names and mascots. Those that do not are on the wrong side of history.

Baseball creates employment, fosters community spirit and provides food we can't get enough of. But the recent behaviour of some fans, along with Cleveland's team name and symbols, remind us that sports can also be a place of prejudice.

We may not be able to change Cleveland's team name and logo today, but we can do our part here at home by advocating for the end of indigenous mascots on Canadian teams.

As we draw closer to celebrating Canada's 150th birthday, we must turn the page on this part of professional sports and create the next chapter in Canada's history, together. Go Jays! Go Canada! 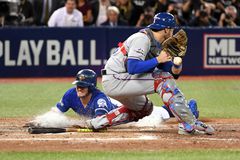