Reading the grand-jury testimony in the Darren Wilson case, it's possible to imagine that, if everything the officer said happened on the day he shot and killed 18-year-old Michael Brown happened – just the way he testified it happened – he would still have killed Mr. Brown even had Mr. Brown been a white man and not a black man.

What I have difficulty imagining is that Mr. Brown would have been in the position he was in that day, had he been a white man. And my inability to imagine that is supported by statistics.

In Britain, the Equality and Human Rights Commission reported that the Metropolitan police are 28 times more likely to stop and search black people than they are white people.

Not-black people, go and talk to black people, and they will often tell you of searches of neighbourhoods so all-encompassing that they amount to dredging.

I want you, fellow white people, to imagine being stopped on the street often; people of colour, you can take the rest of the column off. Let's make this easy for us, white people. Let's remove all potential danger, and history of brutality, from these inquiries. Let's say these people who stop you are not the same people who put your father in jail or beat your cousin. Let's imagine, for example, you're being stopped and questioned by dry cleaners, and see how that goes.

Dry cleaners approach you often. You get to know the drill. "It's linen, dry cleaner," you say politely, as your mother taught you to do. "Natural fibres do wrinkle; it'll relax in the heat. You don't need to press this. Now, if you'll excuse me, I'm late for a meeting."

It starts to get to you after a while, white people – a short while, I imagine, knowing you as I do. "No, I don't need to come in," you snap one day, upon your third grilling that month. "It's hand wash, dry flat. I read the label, I know what I'm doing here, I got this one."

Yet, still they stop and ask, "Do you starch that collar?" or demand to see your dry-cleaning ticket." They check your pockets and when you complain about it, people tell you that's their job.

Now, suppose on top of everything else, when you do go to the dry cleaners, when they're needed, their response time is terrible. There's no same-day service for you, white people, even when you've a wedding to go to and you ask the local dry cleaner nicely. It's like you don't pay the same dollar as everyone else for the service.

Imagine you're told that things will get better, yet still those dry cleaners remark on your pleats as you walk down the street, as if just being on the street were an issue. Maybe white people, while being grilled, you see black people walking by – the status of the lining of their smart fall coats unchallenged.

I know you would get angry, white people. White people would last eight months at best in all this. In the cities, we're close to rioting even now because "Because I Am a Girl" people keep talking to us – and they have clipboards, not guns. We would protest in the streets after three months of inquiries from dry cleaners, and maybe black people would then say, "If you weren't out on the dirty streets, you wouldn't need a dry cleaner, but there you are, making trouble."

Some white guys would tip a Volvo during one of these protests, as if their team lost the Cup.

Perhaps that car lit on fire would be virtually all that got reported. A car burning in the street unattended for three hours sparks more network hand-wringing than a black boy's body left for four.

"Look at all that grey smoke," non-white pundits would say, gravely. "The dry-cleaning bill is going to be huge." 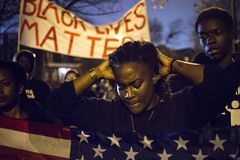