Ken Coates sat in on a recent presentation to executives of some of Canada's biggest companies. It reviewed the results of a massive survey of university students about their work expectations. The survey found that work/life balance and vacation time ranked extremely high on their wish list. They also expected high salaries and quick promotions. On average, they expected a starting salary of $53,000 a year.

At the end of the presentation, a senior executive said: "If what you say is true, then we cannot succeed as a company in Canada."

Prof. Coates is a professor of history and former dean at the University of Waterloo. He's also the co-author of Campus Confidential, a must-read for anyone interested in the lowdown on campus life. The book also is a guide to the mindset of the entitlement generation – the kids who've always been told they're smart, and never pushed too hard.

But don't take his word for it. Many students openly admit their goal is to succeed with the least amount of effort. And many universities make this easy for them. It isn't hard to find courses where you can get good marks even if you don't show up. Professors say it's not uncommon for 30 per cent or 40 per cent of their students to skip any given class. And students strenuously object if they don't get the marks they feel entitled to. "They got 80 per cent in high school and, when they get 62 per cent, they're mad," says Prof. Coates. "They bring assignments in late and think we'll mark them without penalty."

But why wouldn't they think that? That's the way it's been all their lives. This week, Prof. Coates was on CBC Radio's The Current, along with Emma Godmere, who works for the Canadian University Press. Here's how she explained why students are so quick to protest their marks. "We've been taught to stand up for ourselves and to believe in what we think is right. Our generation has been taught that, if you don't think something's right, you speak out."

Plenty of students believe their professors' expectations are downright unreasonable. "They think their lecture is the only way to get their information. But there are so many new ways to learn," one University of Alberta student told the CBC. They're also unapologetic that study hours have shrunk to the vanishing point. "We're doing so many other things. We're doing all these clubs and extracurricular activities."

What they aren't doing is cluttering their minds with ideas. University students once devoured the works of Frantz Fanon, Karl Marx and Gloria Steinem. Today, they devour the works of Harry Potter. "Well, at least we're reading something, right?" Ms. Godmere, the student spokesperson, said. Like many students, she believes course reading lists need to be more relevant. "These works that we are expected to read are from a different time. More people need to cater to the younger audience." To which Prof. Coates responds, "If you want to tackle the most difficult, interesting, challenging thinkers in the world, you have to read very thick books with lots of words."

Oldsters have been lamenting the laziness of youngsters since Plato was a pup. But never has the disconnect between young adults and the world that awaits them been so vast. Today's economy is more challenging than it's been in a generation – and things are likely to get worse before they get better. And the global challenges – from climate change to financial meltdowns – are enormous. But most kids just aren't that interested.

The entitlement mindset didn't come from nowhere. It came from us. It came from a generation of adults who believed that kids should never be allowed to fail, or told the truth about their abilities, or learn that getting what you want is sometimes hard. On top of that, we have the modern fallacy of higher education – much beloved of politicians, who believe the acquisition of a BA is a sort of alchemy that can transform intellectual dross into gold and ensure that everyone, no matter how inert, can succeed in the knowledge economy.

Not all students share this mindset. The best are as good as ever, maybe better. The top 15 per cent or 20 per cent – the same students who would have gone to university a generation ago – really do crave intellectual engagement. They really will land jobs at $53,000 a year, and up.

Ken Coates believes we should bring back streaming and make vocational education far more important than it is now. University should be for students who are interested in, and capable of, high-level work. Colleges and tech schools can offer more practical, job-oriented education for everyone else.

As it is, we have the worst of all worlds. A wave of BA's (and MA's, too) are entering the work force and getting a bitter shock. Waterloo's car-rental agencies, for instance, are staffed with university graduates behind the counter. They expected something better. Will they blame us for not preparing them? They should.

"There is no easy route to great success," says Prof. Coates. "A generation has lost touch with that." 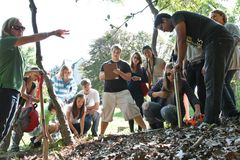