When I first met P.D. James at her London home in 2005, she showed me a picture of herself, clad in the ceremonial robes she wore to the opening of the House of Lords. In addition to being the queen of crime, author of 21 celebrated books, she was also Baroness James of Holland Park, Tory peer.

The robes were sumptuous, crimson wool trimmed with ermine and gold brocade, and I suggested that they looked rather cozy. She looked at me impishly from under a sleek nest of silver hair. "They'll keep me warm in the nursing home," she said. She was 85 at the time, with two of her finest novels still in the future.

She didn't need a nursing home, thank God. Her British publisher reported that she died "peacefully" at home in Oxford, aged 94. "Peacefully." You have to laugh. It's not like she was ever interested in peaceful deaths – death by hanging and stabbing and poison, yes. Even as a little girl, she was "death obsessed," she admitted, and would look at her little classmates at the beginning of school and wonder who'd be six feet under by year's end.

I had the great good fortune of interviewing Ms. James three times at her home in London, and each time I fell a bit more in love with her. It was all I could do, looking at her William Morris wallpaper and first editions of Jane Austen, charmed by the conversation that ranged from footballers' wives to Sherlock Holmes, not to say: "Phyllis, would you adopt me?" But she had children and great-grandchildren and millions of readers who all had a greater claim on her time and affection.

I would leave her splendid house in Holland Park, full of tea and shortbread, making a note to buy the book of Evelyn Waugh's letters she'd told me about, and think: That is a life well and heroically lived. And I'd resolve to live better and more heroically myself, a pledge that lasted just long enough for someone to step on me at the Tube station, and "better" curdled into "bitter" in an instant.

We often hear about digital natives, the people who can't remember life before the Internet, but Ms. James belonged to a generation bound to a different set of principles: The generation of sacrifice, the ones who could keep a secret. She disdained diary-keeping as egotistical, and did it only for a year to produce her wonderful memoir, Time to Be in Earnest.

As for secrets and sacrifice, her life was circled by both. The product of an unhappy marriage ("of course it lasted; marriages, however unhappy, did in those days"), she was married herself at 21 to a doctor, Connor Bantry White, who was ruined by his service in the Second World War. For 20 years afterward, he was largely confined to psychiatric hospitals, and she would write while on the train to visit him. She raised their two daughters on her own, while working in public service, first as a hospital administrator and later in the criminal-justice bureaucracy. Her husband died in 1964, likely a suicide. All she said publicly on the subject, on a BBC Radio program years later, was: "I found him." Sharing was not her generation's coin.

I asked her how she made time to write her first novel, Cover Her Face, in 1962. She told me that she lived with her in-laws, who would help look after her girls in return for the gossip and newspapers she brought from the outside world. During that interview, she wanted to correct a misconception: She had chosen the initials P.D. for her publication name because she thought they looked "dashing" on a book spine, and not because she was trying to hide her female identity. In fact, she chose to publish under her maiden name: "I didn't want to use my married name because I thought, as a woman, these are my genes."

Perhaps foolishly, I asked if she'd turned to writing as therapy during those difficult years. She looked at me as if I'd left something unpleasant on the rug. Not solace, no; but perhaps compulsion. At our next meeting, five years later, she made a remark about writing detective fiction that made me think she had in fact been trying to set something right, internally and externally: "The underlying message [of mysteries] is that no matter how difficult problems are in life – in your own life or in the life of a country or society – in the end they can always be solved, not by divine intervention or good luck, but by human intelligence, human courage, human perseverance."

When I heard that she had died, I felt deflated. But then I went and listened to the tapes of our conversations, her delight in talking about her beloved Austen, her gentle chiding over the readiness of the tea, her flirting with the young photographer. I thought about her quote about intelligence and courage and perseverance, and while she would never have dreamed of describing herself that way – the immodesty! – it's how I would describe her. Those qualities lived in the woman, and they're still alive now, in the books she left behind.

Appreciation: How P.D. James changed my reading habits – and my writing
November 27, 2014 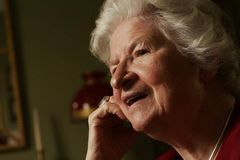