On Wednesday, the European Space Agency's Rosetta mission placed the Philae lander, a small spacecraft, on the surface of an icy comet the size of Mount Fuji. The comet is travelling at the speed of 18 kilometres a second, and the Philae travelled 6.4 billion kilometres to reach it.

It seemed an incredible thing to do, indeed an impossible thing to do. At first glance, it might seem an inexplicable thing to do, or at least dozens of journalists seemed to fear it would be perceived that way and they banged out slightly defensive pieces on why it was an important thing to do. Several such lists pointed out how beautiful the pictures were and how great the sound quality was, as though this mission were a James Cameron production they felt a bit ashamed of watching, or an unnecessary sequel to some previous blockbuster human endeavour.

People have landed on the moon of course. We've landed things on Titan, a large moon of Saturn that boasts its own atmosphere. We're practically regulars on Venus, where they let us keep a bottle behind the bar. We landed the Hayabusa spacecraft on asteroid 25143 Itokawa, and then we brought that spacecraft back to Earth.

We are now old hands at landing things on things, and with this week's landing on comet 67P/Churyumov-Gerasimenko, there did seem to be some concern among science journalists that the general public would get the impression scientists are basically stunt-landing on things.

Scientists did not necessarily help their cause here. "How audacious!" James L. Green, the director of the U.S. National Aeronautics and Space Administration's Planetary Science Division, said of the event. "How unbelievable to be able to dare to land on a comet."

Applauding an accomplishment as "audacious" is, increasingly, our reaction to ventures that demand our approval, but that we are not at all convinced were worthwhile. Mr. Green's remark rather made it sound as if the comet landing was the Lena Dunham biography of space exploration, or the extraterrestrial equivalent of a hot-dog-eating competition to which the response might well be: "Wow, that must have been really difficult. I would have thought that impossible. I mean, I cannot believe you did that. When did this even become a thing? No, really, don't tell me. It's just great. Congratulations."

Instead, humanity was mostly universally joyous. "Hey, we landed on a thing! We put a thing where there was no thing before! We thinged an unthinged thing."

It is a basic human drive.

That this particular thing is a comet, something we perceive as fleeting (comets burn bright near the sun, and then fade away as their orbits take them back to the outer solar system), adds enormously to the thrill of this particular landing-among-landings, and somehow also lends it poignancy.

The heavily anthropomorphized Twitter account for the Philae Lander, @Philae2014, is followed by more than 300,000 people already. Its gleeful tweets and pictures brought a lump to my throat, knowing the lander has only 60 hours of battery life: After bouncing twice upon landing on the comet, it came to rest, somewhat insecurely, in the shade, and will have difficulty recharging.

"I'm quite photogenic! That was one steep fall! Thanks for watching out for me during my #CometLanding," it tweeted. "Now that I'm safely on the ground, here is what my new home #67P looks like from where I am," it said chirpily.

It's like reading the merry tweets of a newly launched child star who'll die up there and is never coming home; but for now, the lander is on that tiny world, gazing. The Little Prince.

No one need ever worry people will not care about these flights of science – or that these ventures don't matter. This endeavour, no matter the outcome, has worked: In the words of Antoine de Saint-Exupéry, writing not in The Little Prince but in his passionate, personal, aeronautical masterpiece Wind, Sand and Stars, "Life has taught us that love does not consist in gazing at each other, but in looking outward together in the same direction." 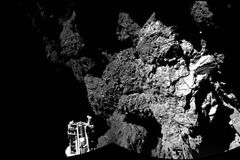 Philae probe is first ever spacecraft from earth to land on a comet
November 12, 2014