Enmity for organized labour has been a key feature of the Conservative brand ever since the Harper government came to power. Laws imposing contracts, banning strikes, cutting pensions, and limiting union freedoms have figured prominently in the legislative agenda. And throwaway swipes at union bosses, inflexibility, and fat contracts regularly pepper party communications, from ministerial speeches to fund-raising letters.

Perhaps union-bashing was once a potent button for Conservatives. Whatever ailed the economy, they could blame "big labour" – and many recession-fatigued Canadians would agree. More recently, however, the calculus of anti-unionism has changed. Union-bashing may be doing more harm than good to Conservatives (both federally and provincially). How will this influence the Harper strategy leading to next year's election?

A key moment in this sea change was June, 2013, when the government suffered an extraordinary defeat at the hands of Conservative Senators. Bill C-377 (nominally a private members' bill about union financial reporting, but in practice a broad attack on unions overseen directly by the Prime Minister's Office) was amended in the Senate – so dramatically as to defeat its purpose. The amendments were backed by 16 Conservatives, led eloquently by Hugh Segal, who pilloried the bill as "flawed, unconstitutional, and technically incompetent."

The bill was also denounced by privacy experts, constitutional lawyers, and investment and insurance executives (aghast at the requirement that any union payment over $5,000 must be disclosed). The amended bill went back to the Commons – but then the Prime Minister prorogued parliament, and the whole process started over. The Conservatives re-introduced C-377, unamended, last October, but signalled it would likely die on the Senate order paper.

Fast forward a year, however, and it seems the government wants to take another kick at the "big labour" scapegoat. They want to change Senate procedural rules to limit debate on private members' bills. They've resuscitated C-377 from the dead for second reading, and are also accelerating another anti-union private members' bill: C-525, which makes it harder to form a union, and easier to get rid of one. The new procedures would allow the government to push both bills through with less fuss. Senator Segal, meanwhile, has retired – although that alone won't flip the outcome since the initial vote to amend it wasn't even close (49-33, with 7 abstentions).

C-377 would probably never take effect anyway, even if passed, since it almost certainly violates provincial constitutional authority and federal privacy standards. But that's beside the point for the Conservatives. With a year (at most) to the next election, it is an opportunity to distract voters from a disappointing economy and Mike Duffy, buff their business-friendly credentials, and – above all – motivate their core supporters. A reinvigorated crusade against union bosses will certainly sell well with the hard-core base (the ones who write cheques and hand out leaflets). But will it help with the broader electorate? Not anymore.

In addition to the C-377 debacle, several other labour issues unfolded badly for the Conservatives (and their provincial counterparts) in the last year. Ottawa backtracked dramatically on its Temporary Foreign Worker program in the face of public outrage – opposition led by unions. In Ontario, PC leader Tim Hudak self-immolated in fiery anti-union rhetoric. In B.C., Premier Christy Clark's attempt to paint the teacher's union as public enemy number one backfired; she finally withdrew (after a needless three-month strike) her plan to unilaterally seize control over classroom sizes. Even in Alberta, the least unionized province, new Premier Jim Prentice quickly abandoned two confrontational (and likely unconstitutional) anti-union pension bills, told by MPPs they were hurting badly in their constituencies.

Where unions were once portrayed as greedy and unruly, they now survive (and even win) by successfully positioning themselves as defenders of public interest and universal rights. This reframing of the union message has been essential in their recuperated influence. Unions cannot be seen as "special interest" groups, enriching their own members at the expense of consumers or taxpayers. They must be seen as an institutional bulwark on the side of all those who work for a living, defending vulnerable people within a social order that is increasingly lopsided. As unions succeed in that effort, the political value of union-bashing will continue to erode.

But this lesson will likely be lost on the federal Conservatives. They are desperate to change the political channel, and eager to throw one more bone to their strident base. In that case, it is safe to expect more anti-union rhetoric in the year ahead. 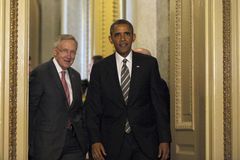