Whether you're buying cosmetics, consumer electronics or clothing this holiday season, "buyer beware" has never been more important advice. Counterfeits in Canada have become so prolific that virtually no product is immune, and most consumers don't even know they're part of the problem.

Every day, Canadians go online at Google or Facebook seeking a Canada Goose coat, with some looking for steep discounts. The problem is that Canada Goose doesn't sell online directly to consumers, and our products are rarely on sale. Yet, thousands of Canadians unwittingly buy fake coats made in China that are filled with hazardous materials – feather mulch covered in mildew, fungus or even feces. They won't keep you warm and, worse, they could make you sick. This year alone, there were more than 2,000 fake Canada Goose websites around the world trying to lure consumers.

But this isn't just about coats. It's about protecting Canadians who think they're getting a bargain and are duped by sneaky online ads and copycat websites for any number of products.

Fake over-the-counter pharmaceuticals that are nearly impossible to detect could prove fatal. Fraudulent batteries could easily explode. Premium body lotions, shampoos, lip balms and fragrances can include pesticides and other toxins. Even a simple extension cord used for your holiday lights could be counterfeit – built with cheap, subpar materials and stamped with a fake Canadian Standards Association seal, the cord could easily start a fire. Toys made of suspect material pose a serious threat to our children. Even our national sport isn't immune: Goalie masks and Hockey Canada jerseys are the latest illicit products to land on our shores.

We believe that most consumers, given the choice, would buy something safe and ethical. But the slick tactics of criminals make it harder than ever to tell what's real and what's not.

How did counterfeits in Canada grow to be such a problem? Unfortunately, this country is money from heaven for counterfeiters.

Canada doesn't allow its border agents to seize counterfeit products at the border. Thousands of fake goods are mailed into the country with little or no scrutiny. Unlike other developed countries, Canada has no central counterfeit authority or federal task force. It may surprise you, but it's not illegal to import counterfeit goods under Canada's Customs Act. And we don't have sufficient mechanisms in Canada to address online distribution of counterfeit products.

To be fair, the politicians in Ottawa are aware of the problem – numerous studies have been commissioned and countless hearings have been held, but we have yet to see action. Until we do, it's up to each of us to protect ourselves.

So don't let counterfeiters ruin the holidays. Be on your guard by shopping from authorized retailers you know and trust, and carefully checking product labels and writing on any of your purchases – odd-looking bar codes, bad grammar and misspelled words are telltale signs that a product is fake. If the packaging looks and feels strange or is damaged, avoid it at all costs, and if a deal looks too good to be true, it is!

In this holiday season, protect those you care about by buying from responsible sources and be extra careful shopping online. Let's hope that, in the New Year, we'll have more safeguards for consumers against dangerous counterfeits.

Dani Reiss is president and CEO of Toronto-based Canada Goose. Kevin Spreekmeester is co-chair of the Canadian Intellectual Property Council and vice-president of global marketing at Canada Goose.

Opinion
Consumerism is good for the soul
December 15, 2012 Put the cookie down! 6 tips to curb overeating during the holidays
December 16, 2012 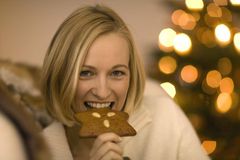