On Monday, I received a phone call from a stranger.

"We're conducting a survey," he said. "How closely have you been following the election?"

I had been randomly selected for a poll measuring enthusiasm toward presidential candidates. These polls are a mainstay of the election cycle, often used to create media narratives of who has captured the heart of the nation. Throughout this cycle, Hillary Clinton has been maligned for an enthusiasm gap ostensibly demonstrated through her more subdued rallies, which lack the frenzied fever of the travelling Trump show.

This is what I wanted to say: This horror-show of an election, along with the wars and economic misery of the past 15 years, have left me wary of all political candidates. I support many of Ms. Clinton's policies, but disagree with others. I feel similarly about her track record and hope she has learned from past mistakes. Her capacity to improve the lives of Americans will inevitably be hampered by partisan gridlock. Ms. Clinton is wildly superior to Donald Trump by every measure and there is no question that she is my choice.

What I said was "somewhat enthusiastic." And so I am now part of the "low enthusiasm Clinton voter" narrative.

Given Mr. Trump and his fans' attempts to cast doubt on the legitimacy of Clinton support by touting ridiculous indicators – like Halloween mask sales – I was tempted to select "very" simply to shift the narrative, but I could not lie.

If this election has taught us anything, it is that enthusiasm for a political figure can be dangerous. It is a pathway to demagoguery, and the absence of enthusiasm is often a sign that the democratic process is working – provided sensible caution does not transform into knee-jerk distrust and other forms of nihilism and zealotry. As citizens, we are not meant to be cheerleaders for presidents; they are meant to serve us. Blind loyalty, in the end, is merely blindness.

Americans entered the 21st century with Alan Greenspan's warning of "irrational exuberance" on their minds, a term referring to the stock-market bubble but which is broadly applicable as a cautionary tale. Things Americans have been irrationally exuberant about include the Iraq War and the candidacy of Barack Obama – the former a foreign-policy disaster; the latter a president at times denigrated for not meeting obscenely high expectations. Mr. Trump, too, is buoyed by irrational exuberance, as are populist authoritarians around the world.

When you see irrational exuberance, run. Or better yet, stay sensibly collected.

Some of Ms. Clinton's supporters have rejected the "enthusiasm gap" narrative, touting their own passionate admiration of Ms. Clinton and noting social barriers that may prevent others from expressing it. There is indeed evidence that Clinton voters are less likely to publicly display support, including multiple secret Clinton fan groups formed out of fear of harassment, and accounts of Republican women privately voting for Ms. Clinton while telling others they are voting for Mr. Trump.

Ms. Clinton is also stymied by the so-called likeability factor, which gets dragged out in tandem with the enthusiasm gap. Media focus on Ms. Clinton's likeability is gendered, as women have long been expected to smile softly and people-please. The insistence that people like Ms. Clinton reflects an expectation that the female candidate serve a stereotypically nurturing role – one she shouldn't have to meet.

Voters are not obligated to like her or be enthusiastic about her. We should evaluate her on her words and actions, like we would any other politician. That involves critical analysis, which is a form of respect: It shows you take a woman seriously as a leader.

Should Ms. Clinton win, she will be the subject of intense critique. If this critique is based on actual statements and actions rather than conspiracies and slander, it should be applauded. Critique of Ms. Clinton will be viewed as a sign of low enthusiasm, but we should be enthusiastic for the opportunity to criticize the powerful without penalty – a right we could lose under the threatening and litigious Donald Trump. 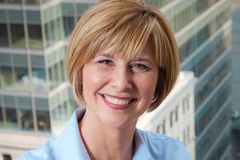 Opinion
Beyond the Oval Office: What Trump may really want
October 22, 2016
Follow us on Twitter @globedebate Opens in a new window
Report an error Editorial code of conduct
Due to technical reasons, we have temporarily removed commenting from our articles. We hope to have this fixed soon. Thank you for your patience. If you are looking to give feedback on our new site, please send it along to feedback@globeandmail.com. If you want to write a letter to the editor, please forward to letters@globeandmail.com.
Comments