Good for Thomas Mulcair and the New Democratic Party. Finally, they have put a Big Idea in front of Canadians.

The Big Idea is federally financed daycare. Make no mistake, it's a big-government idea, and as such will be attacked from many quarters. But parents of young children – indeed all Canadians – should ask themselves: Is our current child-care situation working?

In far too many places, parents either can't find child care or can't afford it. Costs per child can easily run past $1,000 a month, a burden that hurts people trying to balance work and child rearing. Women (who still do most of the heavy lifting with young children) who work produce tax revenue. Proper, affordable daycare allows more of them to work, which means more revenue for the government.

In other words, what's spent on government-sponsored child care should be offset by revenue gained by individuals and governments. This tradeoff, argued for strongly by Quebec economist Pierre Fortin, was brilliantly explained last year in a Globe and Mail series on child care spearheaded by writer Erin Anderssen.

For too long, the NDP has been playing small-ball politics. The party launched an "affordability campaign" that fizzled, promising such game-changers as capped bank-machine fees, reduced credit-card interest rates and a crackdown on payday loans.

This small-ball stuff percolated through the Ontario New Democrats, whose last campaign platform was a mélange of little giveaways without any overarching coherence. Worse, the party's approach, both provincially and federally, was populist small-c conservative stuff, all about protecting people from government. The country already has a party like that in power in Ottawa; it hardly needs another option.

Now, finally, the New Democrats have nailed their colours to the mast of big social reform. Their idea contrasts sharply with the Conservatives' taxable payments to families with children under 6, a parody of a child-care program – the money each family gets is about enough for a child's lunch each day.

The Conservative policy is expensive but politically effective – after all, who doesn't like receiving a cheque in the mail? But it's not a child-care policy, since it fails to offset more than a fraction of the costs of child-raising, let alone daycare.

The Conservative policy is a modern-day version of the very old Family Allowance program, a fixture of federal policy (driven by Quebec decades ago with its large families) that was mercifully wound down under previous Liberal governments.

As child-care policy, it's a joke, but as politics, it's a winner. Even the New Democrats implicitly acknowledge its political potency, because they would leave the Conservative policy in place, rather than scrapping it altogether and applying the money toward daycare.

The NDP document explaining its plan, and Mr. Mulcair's speech, made the realization of daycare seem much easier than it would ever be.

The party says it will "work with" provinces, municipalities and aboriginal groups "to fund and develop" a national plan. (Quebec could keep its own $7.30-a-day plan.)

Welcome to the thickets of federal-provincial relations. Provinces are guard dogs for their jurisdiction over social policy. Often, they say to Ottawa in so many words: "Just hand over the cash and go away." The NDP, never in federal office, would get a rude awakening if it tried to shape a "national" plan.

Then there's the party's pledge for "long-term and predictable funding." The party suggests an eight-year commitment costing $5-billion to create 370,000 spaces – roughly a third of the demand identified by daycare advocates. It's a guess to say the $5-billion would be returned in having more people (again, mostly women) working.

Quebec's heavily subsidized daycare program has been a special boon to the province's middle class, especially the upper middle class, who use their knowledge of the system and contacts to get their kids into the right spots. With parents paying only $7.30 a day (it used to be $5 a day), all sorts of parents who don't need the subsidy benefit from it.

The federal NDP says parents should pay "up to" $15 a day – still a steal for the better-off. The rush for spots in state-subsidized daycare will be intense.

A thicket of problems awaits any federal government that tries what the NDP is proposing. But give the party credit – there is a need, and the party has at least put the matter front and centre. 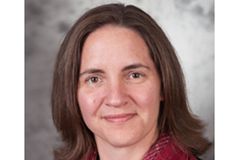 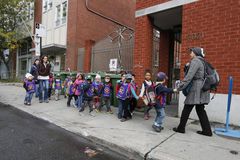