I am the chief of the Whispering Pines/Clinton Indian Band. Our reserves are located near Kamloops and Clinton, B.C., and our community strongly supports the proposal for first nation property ownership legislation, a position which some in the Idle No More movement have criticized.

Since Confederation, Canada has faced two principal challenges as a nation – finding a place in the federation for Quebec and finding a place for us, the original inhabitants. Others can speak about the success of Quebec within Canada, but I think I can illustrate the failure to bring us fully into the federation.

When my grandfather met the woman who would become my grandmother and asked her to marry him, she agreed on one condition – he had to build her a home. My grandfather was a hard working rancher, just like his son and just like me.

He built her that home and they got married. They had a large family. My grandfather built two more homes on reserves for his children. He owned three houses outright and ran a farm and orchard on his land near Lillooet.

As it turned out, none of these houses had any value other than to keep the weather off our backs.

My father later inherited one ranch from his father. He owned a house and built another. But when he went into a bank in the 1980s and applied for a credit card (so he could rent a car and reserve a hotel, like any other Canadian), he was turned down, because, he was told, he didn't have any collateral.

His two houses and his ranch were insufficient collateral because of the provisions in the Indian Act which state an Indian reserve is "a tract of land, the legal title to which is vested in Her Majesty". We don't even own our own lands.

Not owning our land has been an economic catastrophe. We have little of the equity in our homes that is needed to build wealth, gain access to credit and start businesses. We don't have wealth to bequeath to the next generation so it can do better than us. We need the Minister of Aboriginal Affairs and our band government to guarantee our mortgages.

We don't want to be wards of the state. Dependency is not our way. More than 60 per cent of my community's population is younger than 30. I am proud that many of our young adults are educated and employed. They want to stay, live and prosper in our community.

The proposed property ownership legislation is both first nation-led and optional. It will give us hope that we can own our lands collectively and exercise our jurisdictions forever. We can provide ownership to our members so their lands and homes are as valuable as any other in the region. We can register our title in a modern system instead of the costly and unreliable deeds system we currently have.

Property rights will provide a cost-effective method to provide opportunity and increased wealth for my members, give them access to capital and reduce poverty. At a time of government fiscal restraint – and little prospect of constitutional change – this is an option that should be available to interested first nations.

After 140 years of the Indian Act, we are ready to take on this responsibility. We will work with our first nation institutions to provide government that raises and maintains property values, builds equity in our homes and creates strong self-sufficient communities. I am confident that, with legislation affirming our jurisdiction, our land will forever remain ours, just like Ontario remains Ontario even if I, a resident of British Columbia, buy land there.

I am not talking about granting us special rights. We want the same property rights that all other Canadians take for granted. We want ownership of our lands and recognition of our governments. After 140 years, we want to be a true partner in the Canadian federation.

Michael LeBourdais is chief of the Whispering Pines/Clinton Indian Band 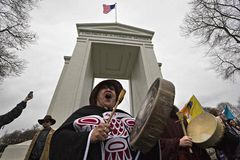 Idle No More: Who is participating and why? Submit your story
January 7, 2013
Follow us on Twitter @globedebate Opens in a new window
Report an error
Due to technical reasons, we have temporarily removed commenting from our articles. We hope to have this fixed soon. Thank you for your patience. If you are looking to give feedback on our new site, please send it along to feedback@globeandmail.com. If you want to write a letter to the editor, please forward to letters@globeandmail.com.
Comments