As a voter, a woman, and a student of politics, I am not at all perturbed that we won't have a "women's debate" in this election campaign.

That's not to say I don't share a great deal of respect for the organizations that tried to make this happen. But putting a gender label on a debate may not be the best way to advance solutions on what needs to be done in health care, social affairs, economic policy, or any other area for that matter. For one thing, it conjures up a sorority vision of tea-and-toast discussions on matters that can't be otherwise raised in the normal course of debate. Worse still, it risks relegating crucial items – child care, gun control, aboriginal education, you name it – into a narrow category of "women's issues" when they are much broader societal challenges.

Defining work-life balance, for example, as a "women's issue" narrows the focus of what should be a larger debate, especially as more men are taking an active role in raising children.

If we really want to raise consciousness about women in this election, let's start with the glaring fact that women are still sorely under-represented in politics and that the face of this election campaign is dominated by male politicians. Notwithstanding that three of Canada's provinces are now led by women premiers, federal politics has yet to become gender-friendly. The presence of Elizabeth May as leader of the Green Party is the exception that proves the rule: powerful parties (as in, parties that expect to gain power in Ottawa) are not populated or led by as many powerful women as men.

By international comparison, as my colleague Elisabeth Gidengil has pointed out, women are still few and far between in Canadian politics (we rank 49th worldwide in terms of women elected to legislatures). There are myriad reasons why women are less likely to choose, or be successful at, a political career, that range from obvious societal realities (family and children) to more subtle yet significant reasons (workplace culture and boys' clubs) to enduring structural obstacles (money, power, influence). And in the Canadian case, these are exacerbated by a political system that concentrates power at the top, and a first-past-the-post electoral system that allows fewer entry points for women seeking office.

Even though political parties have worked toward recruitment – or even quotas – the presence of women is relatively weak. One aspect is the plight of so-called "sacrificial lambs": tabulating data from the past five Canadian general elections, political scientists Melanee Thomas and Marc-André Bodet found that female candidates are still more likely to run in ridings their parties expect to lose. Another is "the higher you go, the fewer you find" phenomenon of women in political party leadership that Sylvia Bashevkin revealed decades ago.

Today, some of the key party players behind the scenes are powerful women; the national campaigns are being led by Jenni Byrne (Conservatives), Anne McGrath (NDP) and Katie Telford (Liberals). But for voters, the election is not about who is in the backroom, the war room, or even the pundits' panels. And for us, the public persona of political leadership – the faces and voices that we see and hear – remains resolutely male.

The real women's issue in this election campaign should not be about the merits of a separate debate, but how these issues matter to all Canadians and why the main leaders debating them are all men. 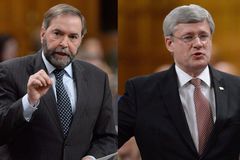