After all this panic, mayhem and gore, most likely nothing will change. This presidential election is reaching a predictable end. And once it's over, the next four years will look a lot like the last eight.

Which would be depressing, were it not for the alternative.

The political class is paying a lot of attention to a recent blog from methodologist Benjamin Lauderdale of the London School of Economics and political scientist Douglas Rivers of Stanford, who warn of misinterpreting "phantom swings," in voter support.

By correlating voter intentions in this election with voter behaviour in past elections, they correct for what they believe are wild and inaccurate swings in support for Hillary Clinton and Donald Trump based on events of the day: The Trump sex-talk-tape! The Clinton e-mails! For them, it was all so much bumph.

Related: U.S. presidential election: What you missed, and what you need to know

Sarah Kendzior: Trump's strategy: Pull the fringes into the centre, and mainstream extremism

"The truth is more boring: Real change mostly happens slowly, and the impact of campaign events is much less than the media makes out."

Hillary Clinton will probably head into election day with a modest lead over Donald Trump, something similar to the four percentage points by which Barack Obama defeated Mitt Romney in 2012.

This makes a lot of sense. The Democratic tent is bigger than the Republican tent, encompassing many white women and some white men, as well as Latinos, African Americans and Asian Americans. All broadly share a cautiously progressive world view.

The Republican conservative coalition of many white men and some white women is smaller. It has been smaller for a long time. If Ms. Clinton prevails on Tuesday, Democrats will have won the popular vote in six of the last seven elections.

Voters in these final days are aligning behind two highly unpopular candidates based on party identification – they are coming home, as politicos like to say – which favours a Democratic win.

But not a big win. The Republicans will control the House and maybe the Senate. So a president with a weak mandate will confront a Congress united in opposition. Sound familiar?

Some observers predict that animus toward Ms. Clinton is so intense that Congress will launch impeachment proceedings within weeks of her inauguration. No it won't.

Republicans were scorned for impeaching Bill Clinton in 1998 over some minor peccadillo. The Republican congressional leadership will know better than to risk major losses in the 2018 midterms thanks to some goose-chasing prosecution over a private e-mail server or donations to the Clinton Foundation. Oh, they will investigate – Hillary Clinton has been investigated most years of her public life – but impeach? Not likely.

That doesn't mean life will be easy for the 45th president. Immigration reform? Unlikely. Climate-change legislation? Surely you jest. Public health care and free university tuition? Don't even go there. President Clinton will struggle to get a budget passed. She will spend more time fighting off another threatened government shutdown or a debt default than she will fighting for her agenda.

What she accomplishes will largely come through executive orders and a foreign policy that broadly follows the priorities of her predecessor, with a few tweaks. Her most important legacy could be the judges she appoints to the Supreme Court.

Meanwhile, the Republican Party will continue its self-immolation. Voices of reason will warn that the party's base grows more narrow every year, that principled conservatism need not embrace the Tea Party or Donald Trump.

Clever strategists will plot how to surf populist anger to win their guy the next GOP nomination.

Yes, it's all rather grey and depressing. That said, the United States under Barack Obama has done pretty well. Another four years of muddling through may not thrill the millennials, but grim veterans know you take what you can get.

Unless, of course, Donald Trump actually is surfing a late wave to victory. In which case … but stop. You'll just get yourself all worked up again. 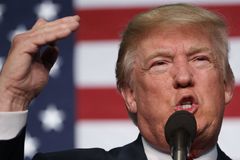 Opinion
Trump’s strategy: Pull the fringes into the centre, and mainstream extremism
November 3, 2016
Follow John Ibbitson on Twitter @JohnIbbitson
Report an error Editorial code of conduct
Due to technical reasons, we have temporarily removed commenting from our articles. We hope to have this fixed soon. Thank you for your patience. If you are looking to give feedback on our new site, please send it along to feedback@globeandmail.com. If you want to write a letter to the editor, please forward to letters@globeandmail.com.
Comments